After playing the nouns, verbs, adjectives board game I made with my son several times, I realized he needed other great ways to practice the parts of speech. Language arts just doesn’t “stick” with my son like math.

He has suddenly developed an affinity for mysteries (we’ve been reading the Hardy Boys Secret Files books to him at night and he’s been reading James Skofield’s Detective Dinosaur books to us). The following two activities capitalize on his newfound interest.

I designed a magnifying glass for my son to use when he played. (To make one, simply cut it out [including the center] and laminate with heavyweight laminate.) Voila! Now he had a spy glass to remind him of what adjectives tell you (e.g. weather, sound, shapes, etc.). 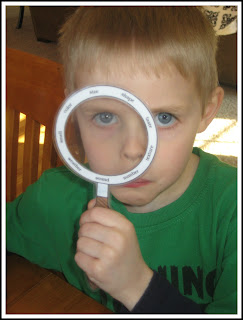 Adjective Detective Hunt
Before my son came home from school, I picked out five objects to describe and wrote adjectives (five each) that describe each on a sticky note. When he walked in the door, I told him that he (aka Adjective Detective) had a mystery to solve. 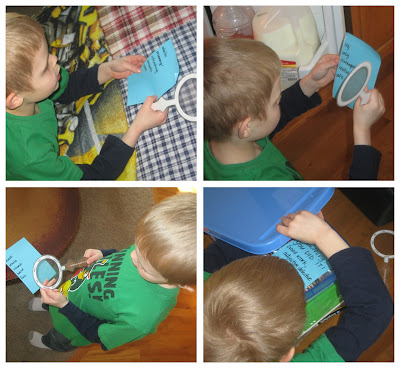 One by one, the adjective clues led him from object to object, until he was rewarded by finding the final object (his colored pencils), which also had a congratulatory note and a sweet treat as a reward.

Adjective Detective Seek
Another day, I decided that it was time for my son to find some adjectives of his own. I gave my little Adjective Detective a story that I wrote. Each sentence of the story has one adjective (hopefully, I tried to be careful to not include any others).

The story is about Detective Dog who works so hard to welcome new teddy bears to the force by bringing in assorted foods each day. Unfortunately, the bears never touch his homemade goodies.

After my son read the story all the way through (I helped him with some of the tough words), I told him that in order to find out why the teddy bears never eat, he’d have to find the adjective in each sentence. He circled it and wrote the first letter of the adjective down below. All of these adjectives (and their letters) were clues to solve the mystery. 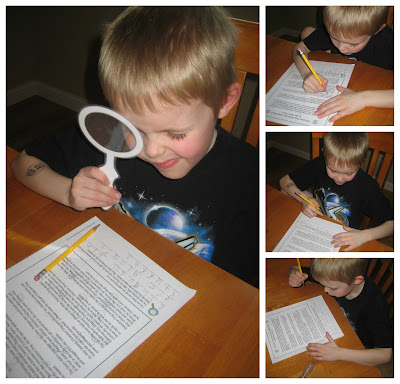 So, why do the teddy bears never eat, you’re wondering, right? Because they are always stuffed!!

My son demonstrated some real patience with this activity, carefully looking for the adjectives and being excited as the answer to the mystery began to reveal itself. It was a lot of reading but I was so encouraged to hear him say “Yes, I knew it!” when he correctly identified the adjectives!
Posted by Deceptively Educational at 7:21 AM