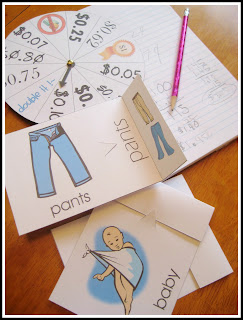 The other night we had the TV on during dinner and “Wheel of Fortune” came on. Since I consider dinner our special time to share news about each other’s day, this is VERY rare.

My son has seen the show a few other times (probably at Grandma’s house) and excitedly exclaimed, “Oh, I loooooove this show! It’s my favorite grown-up show!” Huh?

While he most certainly can’t solve the puzzles, the sheer idea of trying to guess the words, spinning a prize wheel, and winning money seem pretty darn awesome to my 6-year-old. “Wheel of Fortune” was part of the inspiration for this activity.

The rest of the inspiration came the following day, when we were getting ready and on our way to my son’s school music program. As I helped him put his ears on (he played a mouse), he danced around saying, “I’m a mice. I’m a mice!” Last I checked there was only one of him, so I explained that he was a mouse, not a mice.

On our drive to the school, some geese flew overhead and as he caught sight of them, he said, “You know what gooses do when they fly?” Oh boy! “It’s GEESE, not gooses,” I corrected him.

What are tricky plurals?
Those words that either change drastically (i.e. the plural version of the word is not the same as the singular version with an s on the end) or don’t change at all when they become plural (e.g. deer, glasses, etc.) are tricky for children to learn. This activity is meant to help kids (namely, my son) use those words correctly.

How to Play
I made 16 cards with tricky plurals on them. The cards show a single object with the plural version of the word under a folded section. (Download an 8-page PDF here, print them on heavyweight cardstock, cut them out, fold on the dotted line, and use an Exacto craft knife to carefully cut a V shape to tuck the folded flap under.) 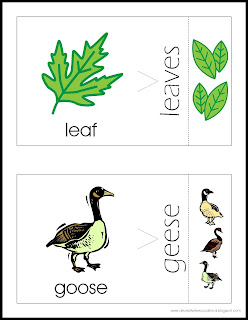 I fanned the cards out in my hand and my son drew one. 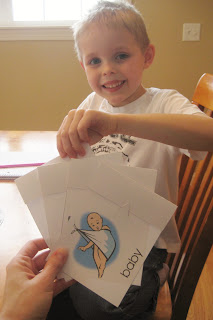 Then he thought hard about what the plural version would be. If he knew it, he said it out loud (and sometimes spelled it, in the case of babies). Next, he opened the card’s flap to reveal the plural. 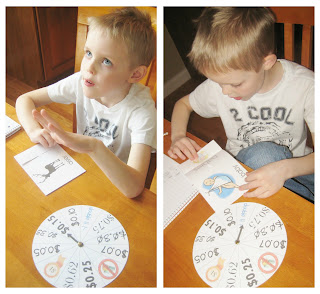 If he had guessed right, he got to flick the spinner on the Pretend Prize Wheel I made. I explained that he wasn’t winning real money. He was still thrilled.


With each spin, he added the new prize money to his winnings. Beware of the “You are bankrupt!” And good luck getting the spinner to stop on “Double It!”

When the game was over, his pretend “winnings” totaled $3.05. Before we finished up, he read a simple book filled with tricky plurals: One Foot, Two Feet: an EXCEPTIONAL counting book.

Posted by Deceptively Educational at 7:24 AM