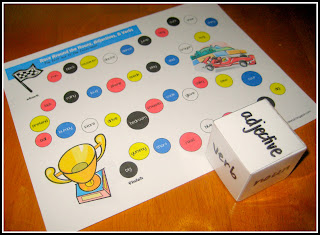 I’m hoping repetition will help my son memorize the differences between nouns, verbs, and adjectives. The board game I cooked up to practice these parts of speech was SO much fun, my son didn’t have a clue he was actually learning!!  (insert evil laugh here)

Before we started playing, I gave him a cheat sheet that defined what nouns, verbs, and adjectives are. Click the picture below to download it. 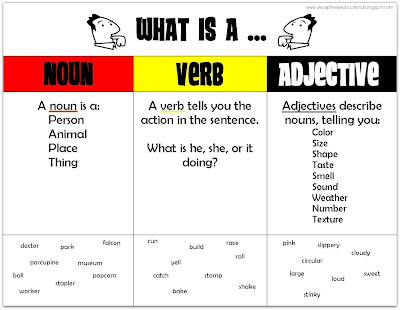 We reviewed these briefly and grabbed two small buttons for game pieces. Then, I grabbed my DIY dry-erase die (instructions to make one are here) and wrote each word (noun, verb, and adjective) on the dice twice with a fine-tip dry-erase marker.

Now it was time to get our engines revved up and get rolling! My son was ready to race around the nouns, verbs, and adjectives on the homemade game board I made. (Download it here.) 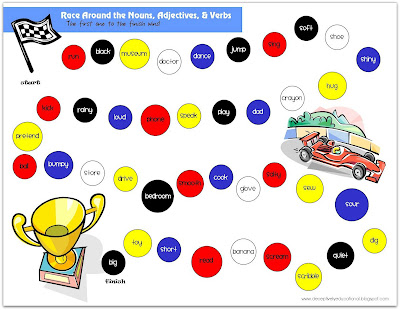 How to Play
This game is super simple. Both players put their game pieces on the starting flag. The youngest player goes first, rolling the noun/verb/adjective die. Whatever is on top of the die when it stops rolling, is the type of word that the player must move their game piece to on the board. The next player rolls next, doing the same thing. 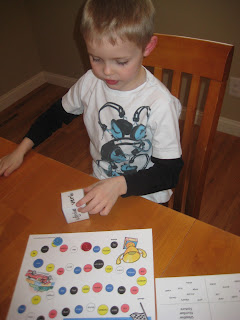 Play continues until the players reach the winner’s trophy. The first player to roll the die and move to the final circle (i.e. roll “adjective” and land on “big”) wins!

My son needed LOTS of reminders and referred to the cheat sheet a lot, which tells me this fun way to practice is exactly what he needs. When we were done, my son asked to play again … and again. Unfortunately, dinner put a stop to our “play” time. There's always tomorrow, though!
Posted by Deceptively Educational at 6:23 AM