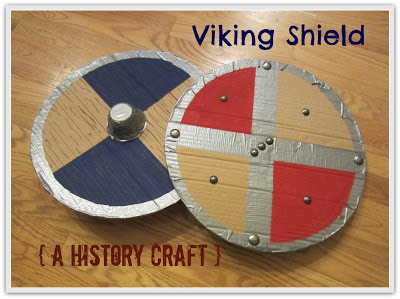 Cheap fun. I love it. And when I tally the expenses for this history craft, they're nominal. But the amount of fun that has resulted is priceless.

When my oldest son and I read our second book in the "Your Life as ..." series by Thomas Kingsley Troupe, I immediately thought of a great craft extension to our lesson on Vikings. But enough about me.

Let me tell you about this amazing book: Your Life as an Explorer on a Viking Ship. Just like our last experience with one of Troupe's storytelling adventures (see the book recommendation and Colonial crafts we made here), we were transported back in time as we imagined the life of 11-year old Leif Grimmson, son of Grimr the Grouch, in the year 812, as he left his family farm in Denmark to explore with the Vikings.


The book intertwines the story of Leif's adventure with loads of interesting historical facts. A few of the things we learned included:


Now it was time to make our own version of a Viking shield!!

Thanks to all the packaging from holiday gifts, we had a surplus of corrugated cardboard. I snagged a few pieces before it went out to the curb with the week's recyclables. We used a round pizza pan to trace the circle and then I used an Exacto craft knife to cut the circle out.

Now I queried "Viking Shield" on Google images. My son and I looked at all the pictures on my computer and he decided on a design. With a large cross made with duck tape, the shield instantly had a wood-and-metal look. 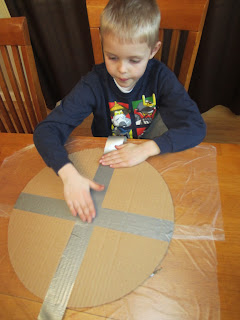 At the time, he had no interest in painting the shield so, we ran another length of duck tape along the shield's edge, clipping it every inch or so to enable it to fold around the circular shape of the shield easily. Don't worry if you don't get the tape to lay flat; that adds to the rustic look! 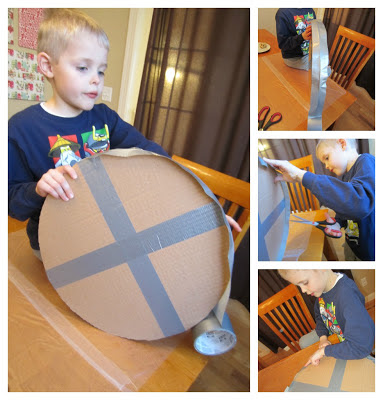 Next, he used the low-temp glue gun to attach some apparel findings that resembled nail heads. 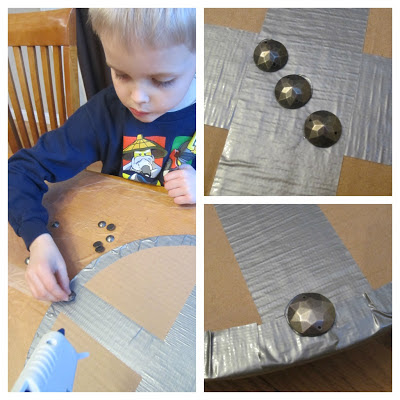 Now all that was left to do was add a handle. 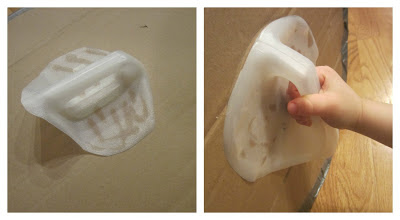 I used the Exacto craft knife to cut out the handle of a plastic milk jug. He used the low-temp glue gun to attach it to the back of the shield.

When little brother came home from preschool, he immediately asked if I'd make him a shield. For his, I masked off two areas with blue painters tape and brushed on acrylic craft paint. Then I added woodgrain with a brown fine point Sharpie. Lastly, I glued on a clean, empty single-serve applesauce cup covered in duck tape to the center.

Now, of course, our oldest saw this and suddenly wanted his shield painted, so out came the paints again! The red paint looks great. I love the final result! 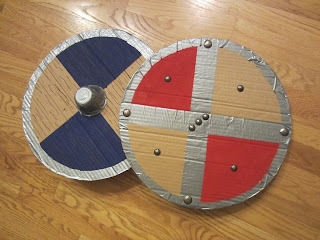 And, while our boys certainly aren't pillaging any villages with their new "armor," the shields have worked wonders blocking the fire of Nerf gun darts!
Posted by Deceptively Educational at 6:55 AM