My mother-in-law bought my son a Scramble Squares puzzle. It has challenged all of us to no avail. It’s certainly been fun, though! Watching my son play with it gave me the idea to make a brain bender math puzzle!

Since my son's teacher told us at his parent-teacher conference that his addition skills were stronger than his subtraction, I thought this would be a good chance to give him more practice.

I made two puzzles of varying difficulty.

I printed each on sticker paper and attached them to an empty cereal box (like I did for both the magic squares and letter magnets I made in the past). I cut them out, attached magnet tape to the back, and handed the easier of the two puzzles (blue) over to my son with a small magnetic board.

I told him that all the pieces needed to form the shape of one large triangle. He needed to position each triangle magnet so every problem was adjacent to the corresponding answer. 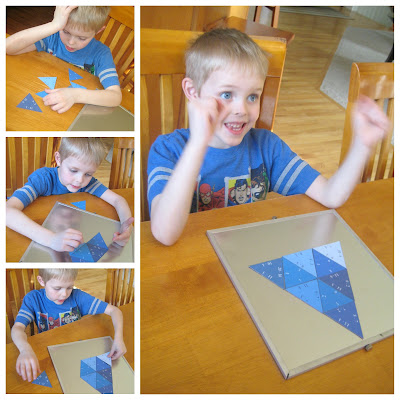 He struggled at first. Before he got too frustrated, I put the top most triangle on the board and told him to work off of that. In no time, the whole triangle was put together!

NOTE: Depending on how saturated the ink is on the paper when you print the blue puzzle, you may need to draw a line under the numbers 6 and 9 on the answer triangles so they are not confused. While this was part of the original design, I found that the ink bled when I printed them and needed to redraw the lines.
Posted by Deceptively Educational at 7:23 AM