Last week my son wore out his Nerf over-the-door basketball hoop. I kid you not. When we replaced it with a sturdier version of the same thing, it dawned on me that I should work a little harder to get my money’s worth out of that toy.

Why not combine spelling practice with shooting hoops?

I quick whipped together a score card and grabbed the list of eight spelling words my son’s teacher sent home in his backpack.

Step 1
I read the word and he wrote it down. 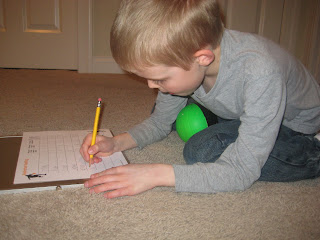 Step 4: Is the word spelled right?
I told him the correct spelling and he checked his work. If it was right, he added a third “1” to his worksheet.

Step 5
He added the numbers together. This subtotal was recorded in the “points possible” column. 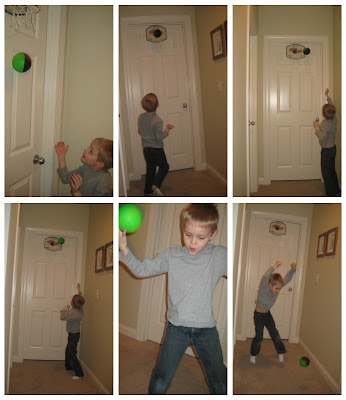 This got my son’s brain working and blood pumping. He was SUPER bummed to spell grape wrong (darn silent e) and disappointed when even after three tries, he still didn’t make a basket, but he tried really hard to both spell words right AND sink some shots.

After his eight words were spelled, he totaled the score. 12 points!
Posted by Deceptively Educational at 7:45 AM