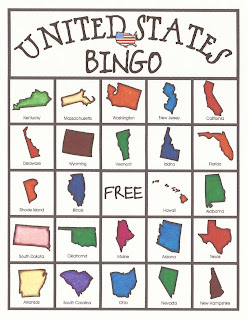 Just last week my son said to me, “Mom, I know all the news.” Before I could ask him what he was talking about, he rattled off, “New Hamster, New York, New Jersey, and New Mexico.” These kind of unsolicited comments make me smile. Why? 1) Because of his mispronunciation of New Hampshire. 2) Because he’s obviously interested in (and learning about) the states of our great country.

It’s been awhile since we pulled out our Scrambled States Memory Game and although I love it, I wanted to do something new with the states shapes I’d made. Since my son loves playing any BINGO game that I throw at him, I thought it was time to make a version with the states.

Before we got to playing, though, we read Loreen Leedy’s book, Celebrate the 50 States! I was lucky to snag this book at a yard sale and consider it one of the gems of our home library.

I let my son pick his BINGO card and cover the FREE space in the center. Then, one by one I selected a state from a pile of cut-up call cards. I called out the states, he searched his card, and, if he found it, covered it with a coin. Like typical BINGO games, when he had five in a row (across, down, or diagonal), he called out "BINGO!" rather excitedly. FUN! 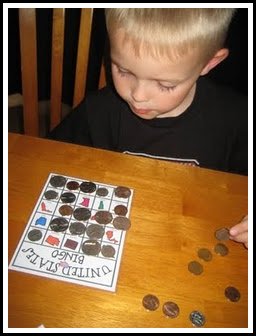 Until my son learns the states better, I’ll show him the call cards so he can see the color and shape of the state. Using coins as BINGO markers worked perfectly. Download a set of six game cards here and a PDF of all 50 states to cut up as call cards here. Enjoy!

Posted by Deceptively Educational at 7:21 AM