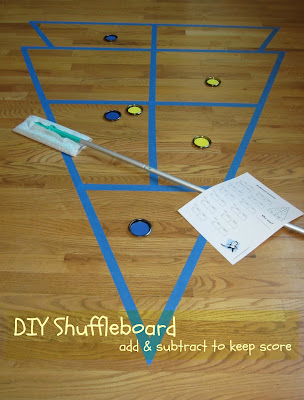 My son and I went head to head for two games of Shuffleboard on our kitchen hardwood floor the other day. He obliterated me the first game, but I came back and won the second. Both of us were pleased!

Like most games, scorekeeping is required. Shuffleboard’s “10 OFF” box means that players won’t just have to add the points from each round, but they’ll have to subtract too! This was loads of fun and a subtle way to slip in some addition and subtraction practice.

I made the shuffleboard court with blue painters tape.

The pucks (or biscuits) were large metal closet door pulls (they were being clearanced out at our local hardware store). To distinguish which pucks where whose, I cut some circles of craft foam and placed them inside the pulls, attaching them with a piece of double-sided tape. 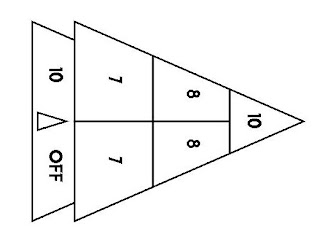 For our paddle, I used the swiffer mop. It worked like a charm.

I put a line on the floor five feet back from the point of the board for my son and I to stand behind. A homemade scorecard helped to keep track of the points. (Download it here.) 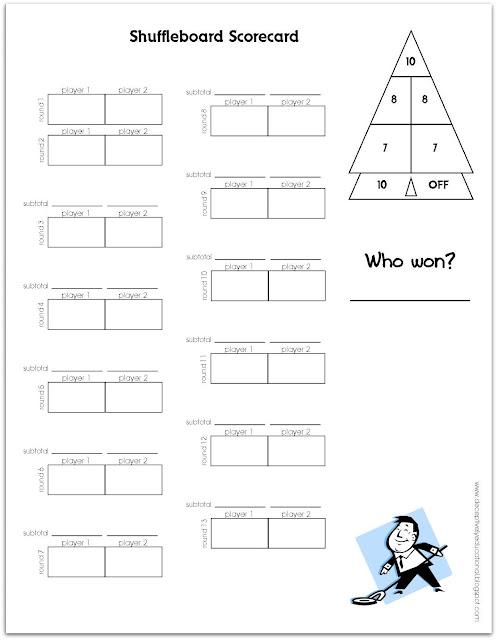 Rules of play (for our variation of Shuffleboard)
Play alternates between two players. Each player stands behind a line and pushes the puck with the swiffer toward the shuffleboard. If the puck is inside any part of the board’s triangle, points are earned. 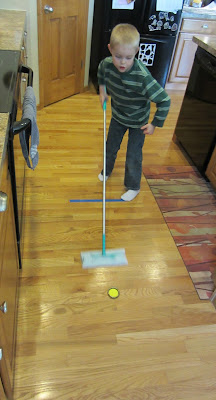 If the puck lands at the end of the board in the “10 OFF” area, the player must subtract 10 points from their score. The opponent can knock a player’s puck off the board with their own. 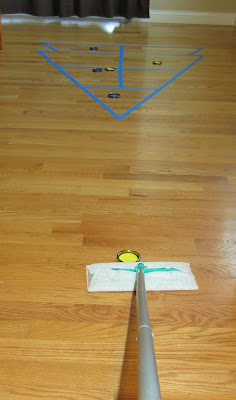 The first player to get to 45 points is the winner! (The traditional game is played until 75 points are earned; the scorecard I made has lots of rounds to account for extended play.)
Posted by Deceptively Educational at 7:06 AM