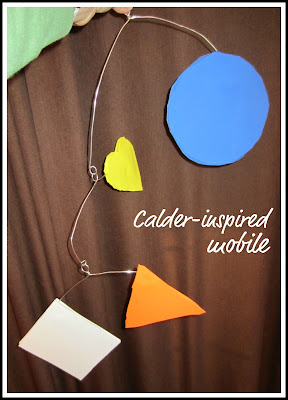 Nobody understood balance better. Nobody appreciated the beauty of a breeze and could make a physical object look more weightless.

His mobiles can send you into a trance, just watching the way the tiny wire arms carry bold organic shapes through the air. Even his static sculptures (often referred to as stabiles) convey motion despite their stationery forms. I am a fan of his work (can you tell?) and shamelessly want my boys to grow up to be as well.

To give my oldest son a fun, hands-on art appreciation lesson, I grabbed some supplies:

Before we embarked on our craft, we read a wonderful book which positively captivated my son. Sandy’s Circus by Tanya Lee Stone tells the story of Calder’s journey from crafty kid to engineering student, fireman on a ship, art school student, working artist, and lastly, a sculptor. My son was brimming over with excitement when the book was done.

“What are we making, Mom?” he asked overflowing with curiosity.

Since Calder’s circus, made from found objects and set into motion, was what eventually inspired his mobiles, I told my son we were going to make our own mobile. I cut a large piece of wire, folded it in half, made a loop and twisted it (sort of like a coat hanger without the hook and flat bottom). 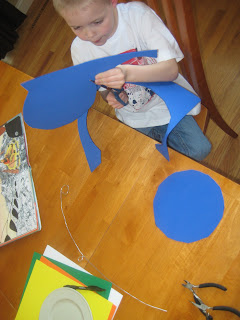 Then I gave my son the craft foam and had him pick a color and shape. Blue circle, he decided. He used a small dessert plate as a template and cut out two circles. 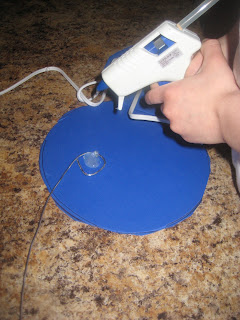 On one end of the wire I’d cut, I bent it into a large loop. He placed one of the circles underneath it and loaded the center with low-temp glue from the glue gun. Then we added the second shape on top. 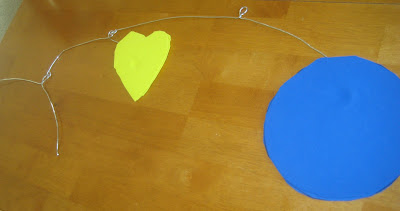 On the other end of the wire, I made a smaller loop and attached another piece of looped wire, per his instruction. He cut out more shapes. We built on the mobile until all the wire arms had shapes or more wire brackets attached.

We held it up. Hmmmmm. One side was so heavy, the other side tipped way up in the air. 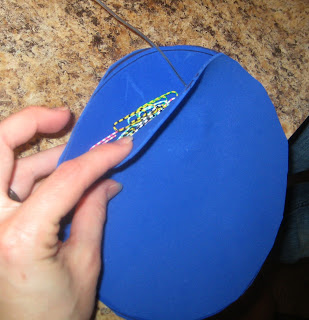 To weigh it down some, my son added glue to the perimeter of the shape, leaving one area unglued, and he stuffed paperclips inside for added weight. 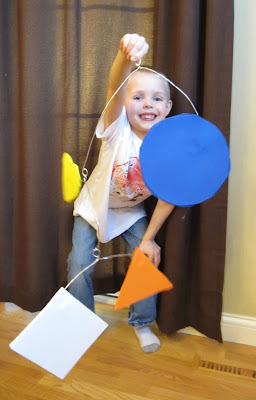 I love the final result and so does my son. It’s proudly hanging from the ceiling-mounted light fixture in his room. I have no doubt he fell asleep last night watching it dance by the glow of his night light.

Note: This wire is REALLY malleable. If I did this activity again, I’d make our foam shapes smaller or use a stiffer wire. The sheer size of the foam weighed our wire form down quite a bit.
Posted by Deceptively Educational at 7:20 AM