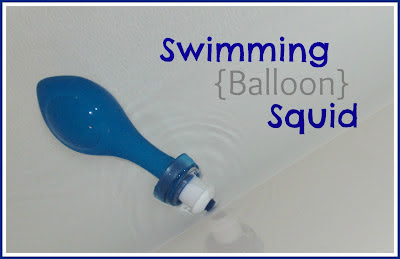 Squids swim backwards?!?! Yep, they sure do. Of course, my son asked, “How do they see where they’re going?”

“I don’t think they do,” I replied and told him it was probably like when he swims on his back. This was definitely something to ponder.

To begin learning about squid, we read a Step Into Reading Level 3 book by Shirley Raye Redmond.

It’s hard to say what impressed us most about her account of these mysterious creatures:
WHOA, that's cool!

When we wrapped up the book, I rescued a pop-up water bottle lid from the recycling and grabbed a balloon. We headed into the bathroom and filled the tub with water. It was time to simulate how the squid swims. 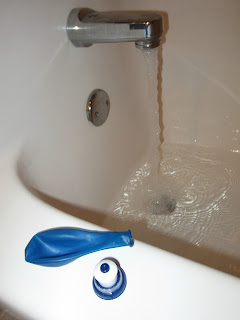 (This is the second activity we’ve done from Cindy A. Littlefield’s book Awesome Ocean Science! Investigating the Secrets of the Underwater World. It’s jam-packed with great activities for ocean-interested kids.)

Following the instructions, we filled our balloon with water. Then, my son pinched the neck of the balloon closed tightly while I carefully pulled the mouth of the balloon up over the pop-up bottle lid (making sure it was in the closed position before).

Now we put our little squid in the bathtub and pulled the pop top open. Hmmm. What was supposed to happen is the force of the water coming out, would send the balloon shooting backwards through the water, emulating how a squid swims.

Unfortunately, our balloon moved very little, which I credit to the fact that we used a regular party balloon instead of a water balloon, which would have enabled us to fill it up a lot more. 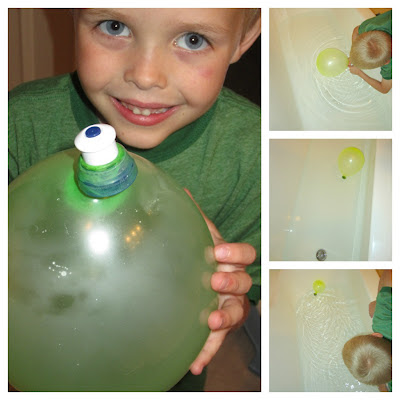 Instead of filling the balloon with water, I filled it with air. I blew up the balloon, my son pinched the neck tight and I added the closed water bottle lid. Then, we put the balloon in the bathtub. While it didn’t sink beneath the water, the way a true squid swims, when my son popped up the lid, SWOOSH!! the balloon shot backwards all over the tub like a rocket launcher.

Success!
Posted by Deceptively Educational at 7:42 AM