Making Waves ... in a bottle 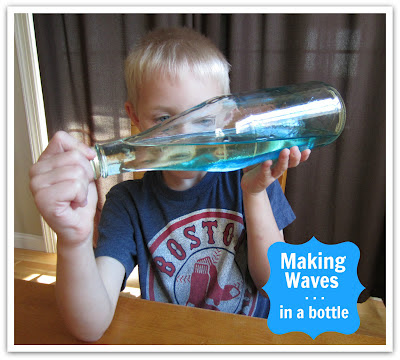 We are totally land-locked here in the Midwest. To say that the ripples of water on the surface of lake water are waves is downright ridiculous; but that's the closest thing we've got to them. Perhaps this is why my son has a fascination with the ocean, because it’s a complete mystery to him.

To teach him about ocean waves, first we read a great non-fiction book. This is the second time we’ve read a book from the Tell Me Why, Tell Me How series (the last time was when we learned about the seasons changing). Wil Mara’s book has LOADS of great information, perhaps a little more than we needed! We only read the first 15 pages.


My favorite light-bulb moment was when I read aloud “A wave does not really start in the water, but in the sky!” and my son burst out with a “what?!?” We read more. Wind energy makes waves!

Mara’s book also taught us the names for a wave’s highest and lowest points. 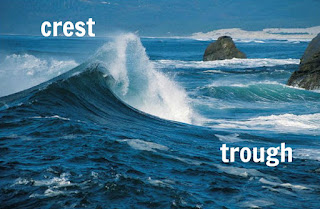 Now it was time to make some waves!

What you need
A clear, thin-necked bottle with a cap (I used a bottle of sparkling lemonade.)
Corn Syrup
Vegetable oil
Blue food coloring Now put the cap on. 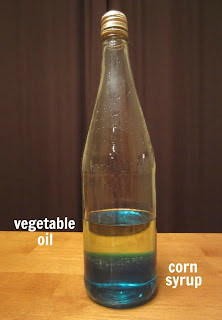 Turn the bottle on its side and slowly lower the neck. Watch the bottom blue syrup layer as a small wave builds and crests in the neck (which is your pretend beach) of the bottle. Now slowly lower it back down, sending the wave back out to the ocean.

CREDIT: The “Breakers in a Bottle” idea came from Cindy A. Littlefield’s book Awesome Ocean Science! Investigating the Secrets of the Underwater World. This book is 113 pages of hands-on activities all about the ocean. There's no telling how much fun you can have with your kids, thanks to this book!

Posted by Deceptively Educational at 7:10 AM