You Be the Author & Illustrator [Ants Activity] 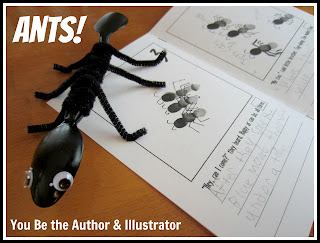 It’s a guarantee that any time we’re outside, we’ll stop to stare at the ants. My kids have always seemed fascinated by these tiniest of insects in our driveway.

The other day, my son and I read a great book about an ant walking along a railroad track and the switchman determined to save him from a seemingly inevitable head-on crash with an approaching train.

Its rhyming text has a rhythm, its ending is comical, and the book’s illustrations are wildly expressive and imaginative. If you’re looking for a fun fiction picture book about an adventuresome ant, this certainly fits the bill.


When we’d finished reading, I flipped back a few pages and asked my son to show me the rhyming words, pointing out that they were the last words in each line. Now it was time for my son to write his own rhyming ant story!

I gave him a book I’d created, printed on cardstock, folded, and stapled in the middle.

We started with the “illustrations” first. My son used an ink pad and his fingerprint to make ants on each page of the book (i.e. one ant on the first page, two on the second, etc.). He simply lined three fingerprints up and drew on antennae and legs. Voila, ants!

Now that the ants were added, it was time for some creative writing. Each page of the book I made has a beginning line that ends in the number of ants on that page. It was up to my son to think of a word that rhymed with those numbers and write a sentence where the rhyming word would fall at the end. 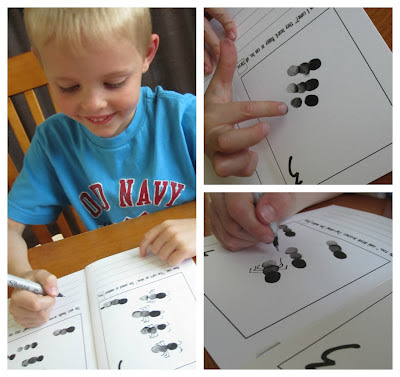 My son can easily match rhyming words into pairs, but coming up with them on his own was a challenge. I had to help him a little with clues. As we worked on the pages, I reminded him that the story was a progression. For example, he couldn’t say the ants saw something blue on page two and never tell readers what blue thing they saw on future pages; the reader would be left wondering. 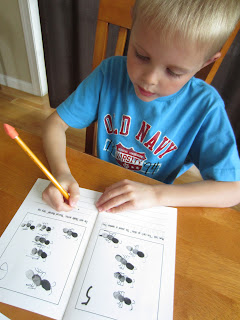 This was a lot of brainstorming and more writing than son would normally do, but he stayed at it and was so proud of the finished book that he called a “meeting” at bedtime to read it aloud to the entire family. Success!

To reward my son for all his writing, we also made one of the characters from his book – Bob the Ant out of spray-painted plastic spoons, black pipe cleaners, and two googly eyes. 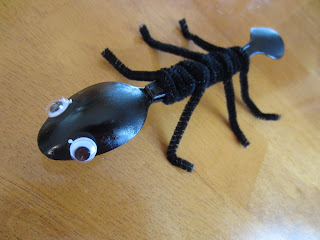 You can find the complete directions for this craft on Danielle's Place of Crafts and Activities on the Bug and Insect Crafts for Kids page. (Variation: We didn’t cut our spoons, but rather just layered one on top of the other.)

Posted by Deceptively Educational at 7:06 AM