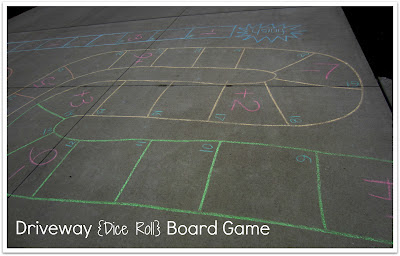 It’s summer. What are we doing inside, right?!? This little activity takes our math lesson outdoors. Put on the sunscreen and get ready for some subtraction and addition fun!

Prep
Take an empty cube-shaped tissue box and cover it with posterboard. Attach dot label stickers to the sides to mimic a die (I had some left over from our Noun Clown activity). Don't have dot stickers? Color some dots with a magic marker! Now cover the box with clear household contact paper for added durability and to keep the die somewhat clean. 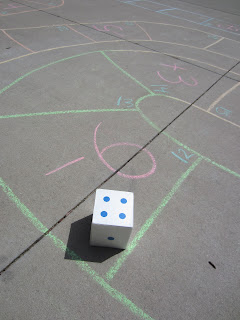 Draw a game board on your driveway with sidewalk chalk. Mark the start and finish clearly. For older kids, make lots of spaces (ours had 47); for younger kids with shorter attention spans or early addition/subtraction skills, keep the board shorter. 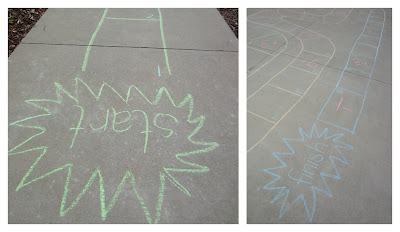 How to Play
Players stand at the start and roll the die. Whatever number is on top when the die lands, is the number of spaces the player moves. In the player lands on a space with a plus or minus, they must move the number of spaces noted (i.e. if a player rolls a six, moves six space, and the sixth space says “-2,” they must move back two spaces).

The player can only move forward or backward once per roll. In other words, in the example above, if the player moved back two and that space read “+4,” they would not move again. 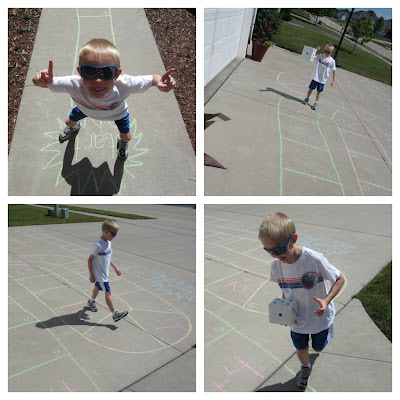 As the player moves they should speak the problem created out loud before or as they’re moving. So if a player is on space 14 and they roll a six, they should say, “14 + 6 = 20.”

Players take turns rolling the die and moving forward and backwards on the driveway game board (it helps if you have a person willing to fetch the die for players; little brother LOVED doing this!). 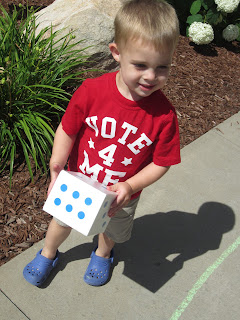 The first player to the finish wins! 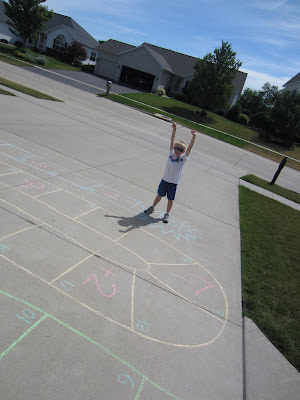 Posted by Deceptively Educational at 7:11 AM