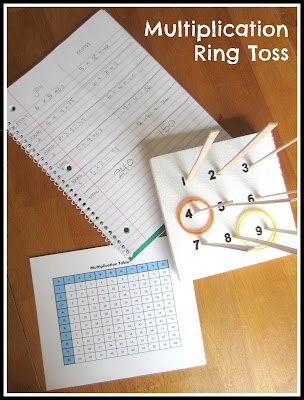 I’m not sure if I could even pass one of those elementary school math timed tests today. Math is just something my brain processes slowly. Thankfully, I’ve outgrown caring. Unfortunately, I still remember the feeling of anxiety and panic that those tests brought on. I hope my sons never feel that in school.

Even though my oldest son is a long way from mastering multiplication (he just finished first grade), anything I can do to simply expose him to the concept serves the purpose of easing the intimidation that he could otherwise feel later. Out of that desire, this game was born.

Before we played, we read If You Were a Times Sign, which is an ideal book for kids who have just been introduced to multiplication.

Multiplication is a fast way to add the same number over again and again.
The answer is the product.
The order of the numbers being multiplied can be reversed and the product is the same.
Multiplication is the opposite of division.
All of these little nuggets of math knowledge were playfully explained in Trisha Speed Shaskan’s book. It’s awesome!

Now my son was ready to practice his multiplication facts.

Push the wooden sticks into the styrofoam, evenly spacing them. Pull each one out and add a big glob of hot glue in the hole; replace the stick and hold in place until the glue dries and its secure. Add number stickers at the base of each stick on the styrofoam.

How to Play
Each player tosses the bottle-cap rings one at a time at the board, which is placed about two to three feet away. If the rings don’t land around a stick, they try again. If it encircles two sticks, the ring is removed and tossed again. 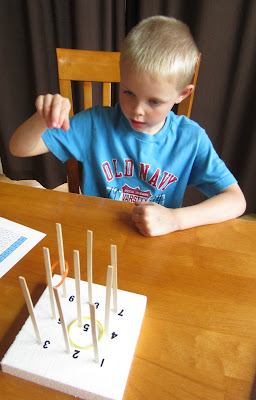 Once two rings have been ensnared around the sticks, the player records the numbers and multiplies them for their Round 1 score. 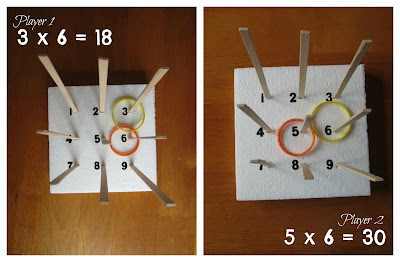 My son used a multiplication table I made (download it here). 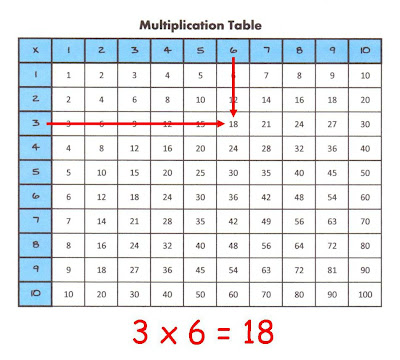 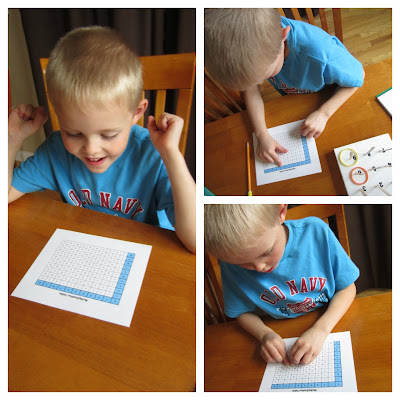 The next player does the same. Who won Round 1? Play continues for four more rounds (five total), when each players’ rounds are added together. 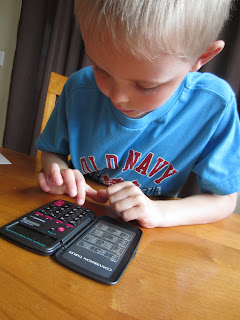 The number will be high so have a calculator ready. Whoever has the highest number wins!
Posted by Deceptively Educational at 7:32 AM