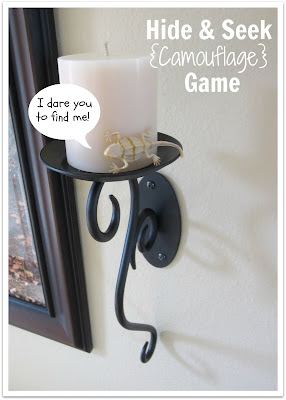 My son wasn’t excited when I told him we were doing an activity all about camouflage. “I already know about camouflage animals, Mom,” he groaned. (sigh) I reassured him it would be fun and tossed a handful of his small plastic jungle animals on the table with a book I’d checked out from the library.

To start, we read an absolutely captivating book written by David M. Schwartz and Yael Schy, with eye-tricking photos by Dwight Kuhn. This is actually the second book by the trio, but since our library system had the first checked out, we “settled” for Where Else in the Wild? More Camouflaged Creatures Concealed … and Revealed.

Oh my, was this fun! The book contains large-scale breathtaking nature photography with riddle-like poems that tease you into guessing the animal(s) hidden on the opposite page. Then readers lift the flap where the image is ghosted out, except for the camouflaged creature(s).

If you thought camouflage was just about frogs being green and leopards having spots, abandon this post and get to the nearest bookstore or library now. There were creatures familiar (e.g. crayfish) and far-out (e.g. Orchid Mantis) in this book. We learned so much and were eager to see what we could find. Sometimes it was easy, other times nearly impossible to spot the animals and insects.

This book was the perfect pairing for our little game. I gave my son his plastic miniature animals and had him imagine that our house was their natural habitat. It was up to him to find places where their coloring would camouflage them.

Forgive the pictures. He refused to let me see him hiding the animals because he wanted to challenge me to find them. And challenge me, he did! 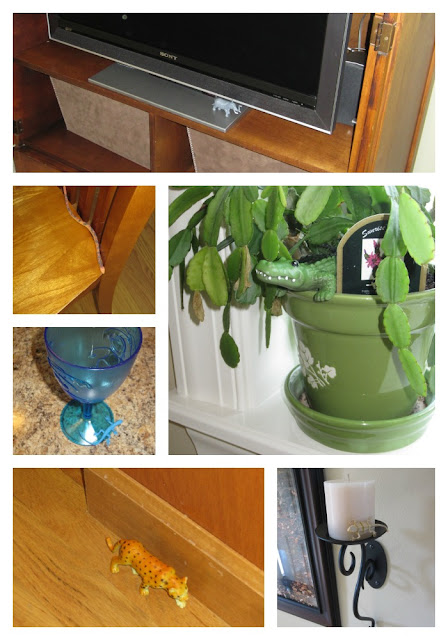 Once they were found, he refused to move them. It was time for little brother to go a ’hunting. The fun continued then. And when Dad came home … yep, you guessed it … he was sent on a wild animal hunt, too.

So as it turned out, even though my son thought he knew everything there was to know about camouflage, he still learned something (did you know the snowshoe hare is white in winter then its coat molts and it is brown by summer? We sure didn’t!). He had a blast with our camouflage hide and seek game!
Posted by Deceptively Educational at 7:38 AM