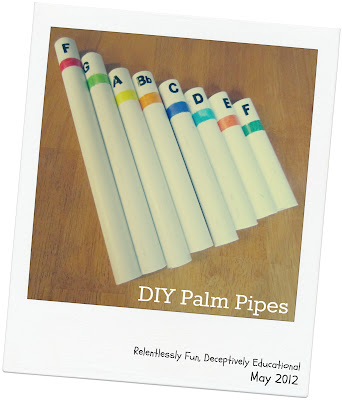 The drinking straw flute was such a success, I was anxious for my son to make another instrument. When I found instructions to make palm pipes out of PVC, I knew my son would be psyched.

When my son came home from school, we read a whimsical book by Steven Kellogg. His account of the Pied Piper’s journey and magical flute was wonderful with playful illustrations that added to our enjoyment of the story.

Now it was time to make some beautiful music of our own. When my son saw the lengths of pipe I put on the table, I could see the wheels in his brain turning. He thought we should tap them together to make music. I explained that these were pipes. When he lined them up longest to shortest, he figured we were just making another pan pipe to blow into. All good conclusions … but wrong.

Before I revealed how to play these pipes, we ran a few pieces of painters tape around each and used different colored permanent markers to add stripes in different colors. 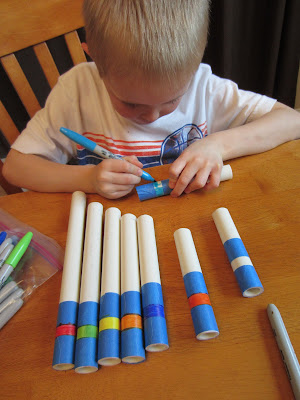 Then I told him to place letter stickers on each and told him the order of the letters. These letters were the music notes each pipe would play. 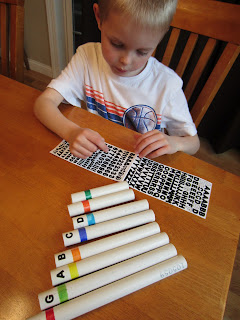 With our pipes colored and labeled, there was nothing left to do but play them. That’s when I told my son to pick a pipe and tap one end of it against the palm of his hand. WHOA! The sound plays a music note, with each pipe being tuned according to their lengths. “Do  Re  Mi  Fa  Sol  La  Ti  Do” he played. To keep our pipes from rolling all over the table, I placed a kitchen towel underneath them. Then he tried his hand (literally) at “My Country Tis of Thee” and “Twinkle Twinkle Little Star” using the notes included with the instructions I used.

This was a riot!! Our toddler had fun with them. My husband had fun with them (tapping them in syncopated rhythm against his thighs). And that night before reading with my son, I had fun with them too, using them to make sound effects to accompany an impromptu poem about a leaky faucet, light and heavy rain, etc. These are a blast!!
Posted by Deceptively Educational at 7:19 AM