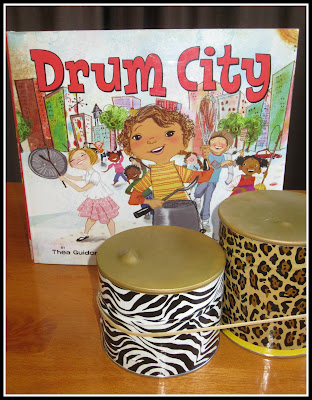 Our musical instrument projects have been a HUGE hit. Just the other day, my sons put on a music concert for me. The toddler played the rainstick, while my oldest treated me to the musical stylings of his pan flute and palm pipes. It was one of those moments as a mother you hope you never forget.

At the library I found a fun book about children who form a band of drummers, using all sorts of unconventional materials to drum on. Drum City was a real treat!

When my son had finished reading, I gave him:
Two sturdy empty canisters of the same width but different height
Two medium-sized balloons (not inflated)
Fun duct tape
Scissors
A long rubberband

He cut the “necks” off of the two balloons and with a little bit of effort, we stretched them over the open end of our canisters. Then we used some fun duct tape to wrap around the cans and the excess balloon, sealing it in place. 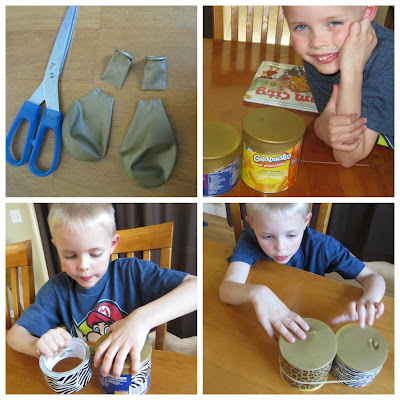 I barely stretched a long rubberband around the two drums, before my son had begun tapping on them. He immediately noticed that because of their height differences, one had a lower sound; no doubt a hypothesis he formed from experiences with his other homemade instruments.