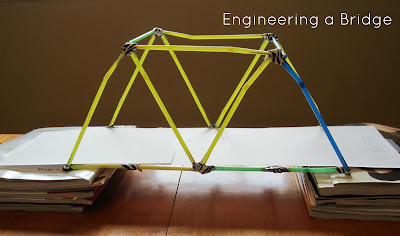 After I attended a Mom’s Night Out for STEM (science, technology, engineering, and math) event, I realized that our afterschool curriculum was void of any engineering-related activities. I know what you’re thinking. Engineering for a six-year old?!?

My answer to that is … YES!

We read a fantastic book by Philemon Sturges that highlighted great bridges from around the world. Through the pictures and the words, we were able to take a trip across the globe and explore feats in bridge engineering. By far, the most impressive in the book was a bridge that holds water for boats to travel on. “Say what?!?” Yep, it’s absolutely real. Both my son and I had to pick our jaws up off the table.

Now, I grabbed some straws and paperclips. And we began building. The paperclips easily slipped into the ends of the straws and could be connected together. 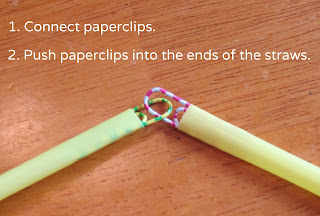 It didn’t take long before we’d built the bottom and sides to a bridge. We added more straws to make the top and connected it all together. 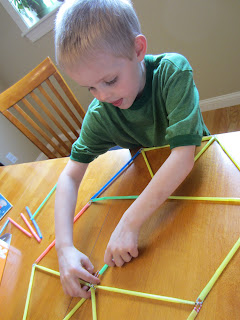 Then I asked him, “What’s wrong with it? Let’s think like engineers.” And so it was that we decided to stabilize our bridge by reinforcing the paperclip joints with thin strips of duct tape. 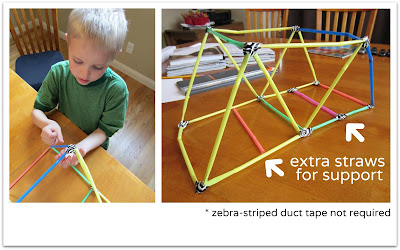 Before we taped heavyweight cardstock to the bottom of the bridge (so my son’s Hot Wheels cars could drive over it), we added a few more straws as crossbars for extra support. 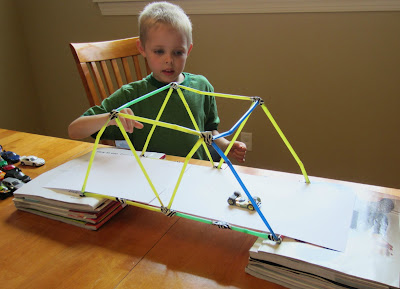 The bridge was a HUGE success. It was as much an exercise in engineering as it was problem solving. And my son L-O-V-E-D driving his cars over it. This activity was fun during and fun after – what could be better?!?

NOTE: I think I'll try to find straws that don't bend for our next bridge.
Posted by Deceptively Educational at 7:03 AM