NOTE: This freebie is no longer available for download because iStockphoto limits the number of printable impressions.


If you’ve been following for awhile, you know that my son has a fascination with birds. (Is he the only kid to use spy gear binoculars to birdwatch?)

When he noticed recently in our bird book that many species of birds were dimorphic (the male and female birds look different), I got the idea to make a fun card game to help him recognize these feathered friends as they stopped at our feeder.

Thanks to the recommendation from a blog follower who turned me on to iStockPhoto, and Curt from client relations who assured me giving away this game wouldn’t be a violation of their copyright, I was able to bring this idea to life!

Before we played, we reread my favorite children’s bird book, which I broke down and bought after we were fined by the library for keeping it so long (oops!). To read my glowing review of Frank Mazzola’s book Counting is for the Birds, click here.

The cards I made were to be played like “Go Fish.” Five cards are dealt to each player. Play alternates between players with each looking at the cards in their hand and asking their opponents for the same species of birds as the cards they were holding. A match consists of four cards – two males and two females of the same species.

After reviewing their cards and seeing two cardinals in their hand, a player would ask an opponent, “Do you have any cardinals?” If the opponent does, they must surrender ALL of their cardinal cards. If they don’t, they say, “Go birdwatching!” At which time, the opponent will pull a card from those that remained after cards were dealt, which are spread out facedown between the players. 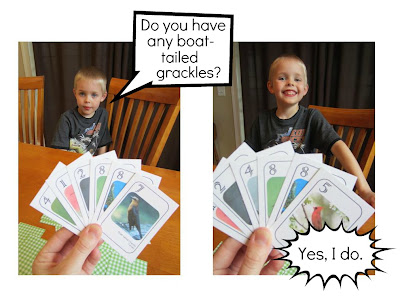 The individual with the most matches when one player runs out of cards wins. (As you can probably tell from the picture below of my son's matches, I was easily defeated during our first round of play.) 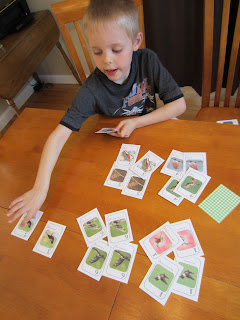 Posted by Deceptively Educational at 7:13 AM