My son said, "I buyed it" the other day. You'd think he'd uttered a four letter word. This writer with an B.A. in English nearly had to cover her ears. Okay, I am being a tad overdramatic. But it was certainly annoying enough to inspire this game.

I used the same template to make the cards as our Irregular Plural Nouns Go Fish game. There are TWO decks of cards for this game, though.

I printed the cards on cardstock, shot the pages with spray glue, and attached different papers to the backs of each deck (I used black and white music note scrapbook paper for the present tense verbs and solid green paper for the past tense verbs). Then I used my paper trimmer to cut out the cards.

Download a 6-page PDF of the playing cards here.

Keep the decks of cards separated and shuffle each well. The game is played like slap jack.

Turn the top card on the present tense deck (black and white cards) over so each player can read it. Leave it face up.

Now begin turning the colored (present tense) cards over one at a time, forming a pile. The player to spot the past tense version (e.g. left) of the present tense verb (e.g. leave) and slap the card first gets to take all the cards underneath. 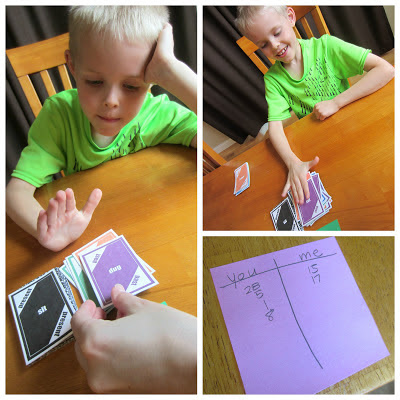 The player counts those cards and the number is written down on a makeshift scorecard. The colored cards won by the player are combined with any remaining colored cards and a new present tense card is flipped over; play continues.

When the timer goes off, tally each player's score. Whoever has the highest number wins!

My son creamed me at this game. I'd like to blame the fact that I was snapping pictures, rather than my poor reflexes.

This was so much fun that my son asked to play SLAP IT! again later that same day!
Posted by Deceptively Educational at 7:16 AM