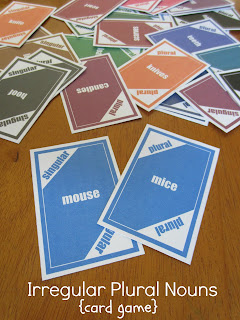 Before we got playful, we read Brain P. Cleary's Feet and Puppies, Thieves and Guppies: What are Irregular Plurals?  Wacky illustrations combine with a whimsical rhyming explanation of the wacky inconsistencies of the English language.


Then I handed him a shuffled a deck of 32 cards.

Five cards were dealt to each of us. The rest of the cards were laid face down and scrambled around in a messy pile. The game is played like "Go Fish." 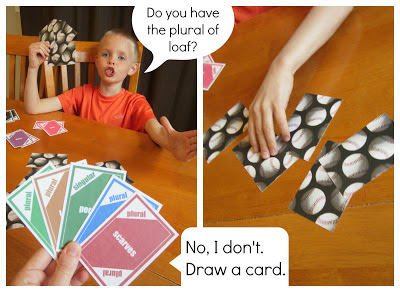 Players take turns asking their opponent(s) if they have the singular or plural form of the cards in their hand, until they have a match. If the opponent provides the card, the player gets to ask again, until they are told "I don't have that card" and must draw a card from the pile in the middle. 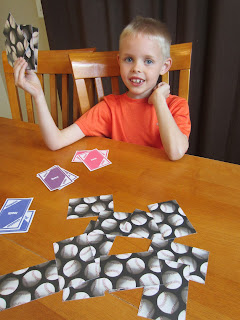 When a player runs out of cards, the game is over. Whoever has the most matches is the winner.
Posted by Deceptively Educational at 7:56 AM