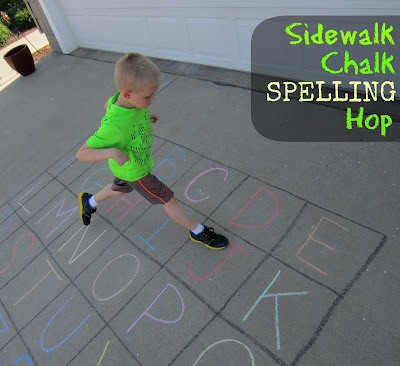 I'm not going to lie. I've had good intentions of making an alphabet mat like the ones here and here for QUITE some time. Truth be told, I'm lazy. Not only would I have to sew, paint, or fashion the letters from tape, I'd have to store the thing after its use.

Sidewalk chalk was the answer!

The idea hit me like a lightning bolt while I was at work. That day, I came home, pulled the car in the garage and before I even hit the door to the house, grabbed our sidewalk chalk to make an outdoor alphabet mat on the driveway.

I didn't even change out of my heeled sandals (which I regretted later).

I made a grid six squares across and five squares down. In the first box, I put a big star. Each box following had a letter of the alphabet (in hindsight, I should have written them in lower case). There were three blank boxes left. To those I added a question mark, an apostrophe, and the words "capital letter." 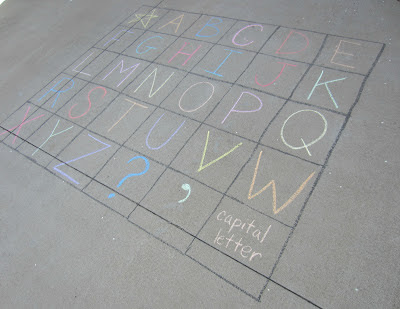 When my son got off the bus and walked up on me finishing up, he was psyched. I explained that it was time to practice spelling. "Outside?" he asked. "Absolutely," I replied.

The rules were simple.


This was just as much fun as the last time I got crazy with the sidewalk chalk! (Check out our Driveway Dice Roll game here.) I knew the activity was a hit when a neighborhood boy came over to play and after I'd explained that the grid was for spelling practice, he said, "I want to try it!" My son and his friend had a bit of a spell off, trying to stump each other. If it weren't for "Wednesday," I think my son would have won!
Posted by Deceptively Educational at 7:46 AM

Email ThisBlogThis!Share to TwitterShare to FacebookShare to Pinterest
Labels: Being Active, Spelling