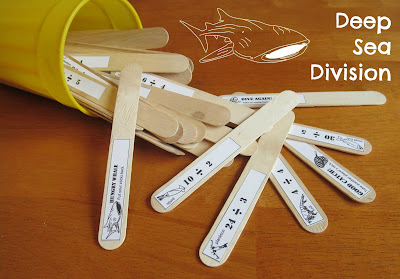 My son has already learned his multiplication facts better than I had at his age. (Something I am extremely thankful for!) After a fair amount of practice, I thought I'd test his division skills.

When I stumbled onto Swamp Fox First Graders' Don't Get Zapped game, I knew I could adapt the game to practice division problems fairly easily. And when my son asked me to create an activity with plankton, the game proved an easy way to deliver on my promise.

Prep
Download and print a free, 2-page PDF of the Deep Sea Division problems I created. Use sticker paper for printing. 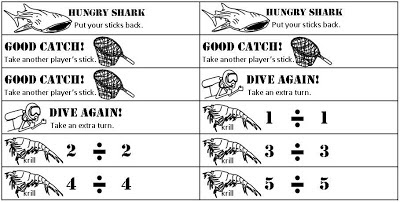 Cut the division problems, peel off the backing, and adhere one to each stick, close to one of the ends.

Put the sticks in the cup, with the ends that have the problems at the bottom.

Play
Set a timer for 3-6 minutes or longer if division is a struggle for any of the players. Take turns removing a stick from the cup. Either answer the problem or do as the stick instructs. 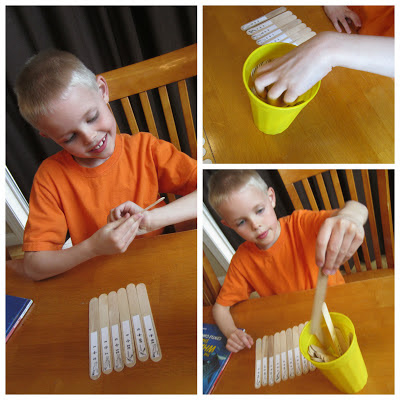 If the player solves the division problem correctly, they keep the stick and begin a pile. The problem sticks have one of four different kinds of food for the whale shark: squid, krill, small fish, and plankton.

There are three kinds of sticks, though, with no problems.
1. HUNGRY SHARK. Put your sticks back.
2. GOOD CATCH! Take another player's stick.
3. DIVE AGAIN! Take an extra turn.

When the timer beeps, the game is over. The player with the most sticks wins.

Want a great book to read about whale sharks, the gentle giants of the ocean? We liked Joanne Randolph's The Whale Shark: Gentle Giant!


UPDATE: At the request of a blog follower, I've added more problems to this game. If your child is ready to be quizzed on the larger divisors, download this new version of the game that includes divisors 6 through 10 (not just 1 through 5). You can download it free from Google Drive here. While using ALL these problems may be too overwhelming, now you've got the chance to customize the game by choosing the problem problems!
Posted by Deceptively Educational at 8:04 AM