A Music Measure of Math 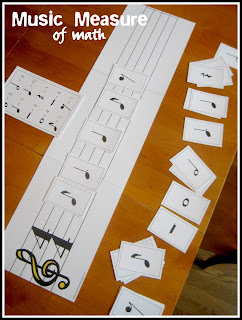 Aside from an appreciation for music, I have no other knowledge of it or possess any talent myself. My son's music teacher’s “tee tee tah” lesson on music notes had my son trying to teach me, though.

His curiosity became mine too.

To help him learn the names of the music notes and practice some math, I designed this fun activity.

The objective? See how many different combinations of notes can be used to create a measure of music with a 4/4 time signature.

I made some “note” cards and a cheat sheet that showed all the notes and rests and the number of beats each has. 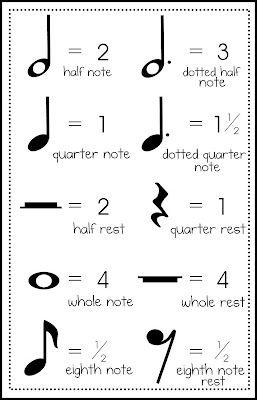 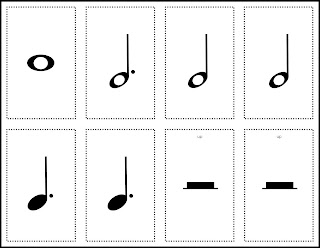 After cutting the cards and taping together the music measure mat, my son sorted the cards into piles. Then I told him that the top number in the time signature (4/4) told us that each measure of music should have four beats. Each note does not have 1 beat, some have as little as a half beat, others as much as 4 beats.

I told him to fill the measure with notes and rests that added to four beats. He started with the easiest combinations: 1 whole note and then four quarter notes. But they got progressively harder. 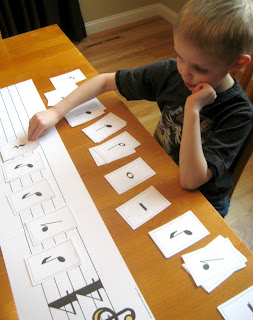 I had to explain that two half beats equal one beat (I used an apple cut in half to show how two halves equal one whole). Then, the fun really began – using the eighth notes and eighth rests! More and more cards were laid down.

This was a great way to boost my son’s music vocabulary and work on counting, addition, and fractions. We made LOTS of different combinations of notes and rests that added to four beats. I lost count after he created 13 measures!
Posted by Deceptively Educational at 7:33 AM