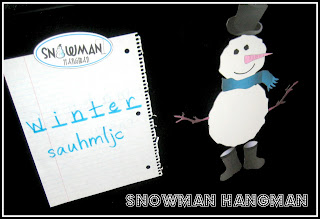 Okay, okay, so my son didn’t really hang our snowman (that's kind of morbid), but he did build it gradually with each letter he guessed incorrectly in my mystery word. I began with a few of the spelling words my son’s teacher sent home and progressed to a few words of my choosing – the current season (winter) and a favorite toy (ninjago).

To make our game, I created a snowman body and some attire. (Download a 1-page PDF of the snowman I made here.) 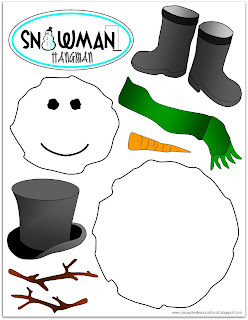 Then, I printed them on a sheet of sticker paper and attached it to an 8½- x 11-inch piece of magnet paper (a 3-pack runs about $5 at local craft stores).

The magnet paper is thin enough to cut through so I got busy with the scissors cutting all of the shapes out.

Yes, the stick arms ARE a pain to cut out, but it's totally worth it.

One of the shapes I made is an oval game label. It worked perfectly to hold a piece of notebook paper on our refrigerator.

On the paper were the blanks I’d drawn, one for each letter in the word I was thinking of.

Under the blanks, I recorded the letters he guessed that weren’t in the mystery word (to keep him from guessing them twice).

I’m not going to lie; I gave him hints – sometimes the number of vowels or other clues – to keep him from getting frustrated.

This was so much fun!

NOTE: Our printer’s color ink was pretty depleted, hence our snowman has a pink carrot nose and blue (instead of green) scarf. We still think he's pretty cute though.
Posted by Deceptively Educational at 7:13 AM