My son can count by fives, so why is it such a struggle for him to figure out the minutes on an analog clock, I wondered. To help practice telling time and reinforce counting in increments of five around a clock, I created a printable inspired by a wall clock arrangement that Mrs. Lemons posted on her blog, Step Into Second Grade (Isn't that clever?!). 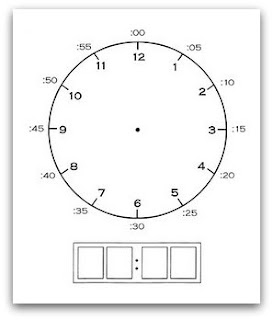 I laminated the Complete-A-Clock printable so my son could write on it with dry-erase markers. (I have a feeling this will get some heavy use throughout the year.)

For our first exercise using the blank clocks, I had my son read Is It Time Yet? by Lesley Jane. (Any children’s book with clocks would work great, such as Jenne Abramowitz’s adaptation of Hickory Dickory Dock or The Clock Struck One by Trudy Harris.) Before I handed over Jane’s book, though, I used small post-it notes to cover the clocks on each of the pages. 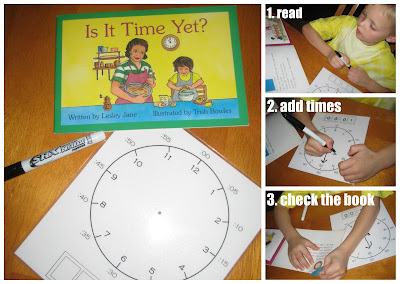 As he read sentences like, “Kelly woke up at 8 o’clock …” I had him write the time in the blank digital clock and then draw in the hands on the analog clock above it. When he’d read the whole page and filled in both clocks, he could remove the sticky note in the book to see if he got the time right. He was so excited with every clock he drew right and only made one error doing the whole book (that’s progress, for sure!).

When he has advanced past telling time on the hour and minutes on the fives, I’ll add some marks between each of the numbers and start challenging him with times like 8:23 or 11:47. Hopefully with enough practice, he’ll be ready for this sooner, rather than later.

Only time will tell ...
Posted by Deceptively Educational at 7:03 AM