Ever since the groundhog announced that Spring would come early, we've been seeing a lot more snowfall. While I'm beyond ready for our thaw to begin and temps to rise, I have to admit, there's something magical about animal tracks in a newly fallen snow.

Mostly we just have rabbit and dog tracks around here, but I thought it'd be fun to explore other types of animal footprints. I was hoping my own curiosity would be echoed by my oldest son; it was!

"What are you making, Mom?" he asked numerous times, cranning his neck to see my laptop when I was designing this animal tracks game.

Playing is easy. Simply print the four-page PDF and cut the cards on the first three pages out. Now scramble them and put them in front of a child.

One by one, by son lined them up to match the animal with its correct tracks. "Did I get them right?" he asked.

"You have two wrong."

"Which two?" he inquired.

"You'll have to figure that out on your own," I replied.

He switched two cards and looked at me with questioning eyes.

"You have four wrong now." 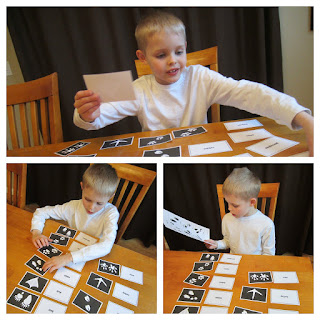 The two cards were switched back and he went back to work trying to find the misplaced matches. In a matter of minutes he was ready with his "final answer."

I handed him the answer sheet and asked him to double check his work. They were all right! 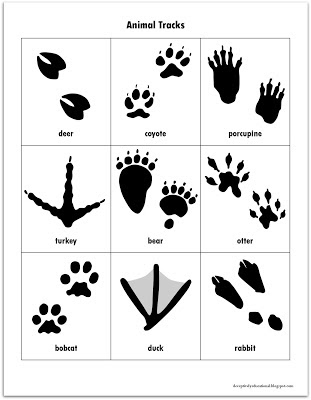 We concluded our afterschool activity with a great book about the different types of footprints (and signs) animals make. My son had loads of fun with Arthur Dorros' book.

Much of the story gives readers clues and pictures but doesn't reveal the animal that left the tracks until the page is turned. My son really had fun trying to guess which animal left what tracks. I'm so glad this book is part of our at-home library!

The fun doesn't have to stop here. Why not try the following extension ideas?
No. 1
Take the Animal Tracks "answer sheet" and go exploring for animal tracks with your kids!

No. 2
Have kids play memory with these cards, matching the correct animal with the right tracks (let them use the answer sheet if they aren't sure or print two of the answer sheet and cut out cards from that).

Posted by Deceptively Educational at 7:37 AM