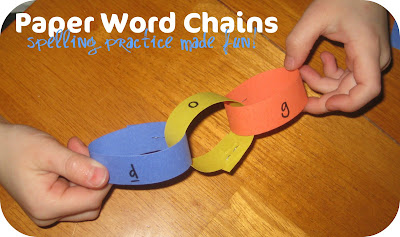 The spelling words just keep on a ’comin. I hope I don’t run out of creative ways for my son to practice them anytime soon! So far, he’s gotten perfect scores on the post-tests his teacher is giving each week. (Keep your fingers crossed!)

Simply reading the words on his spelling list and having him write them never goes well. [Imagine copious amounts of whining.]

When I read another blogger’s post about how all kids like making paper chains, I recalled the few other times he’d made them and realized that she was speaking words of profound wisdom!

So when my son came home toting a short list of the week’s spelling words, I was ready. I’d cut what seemed like a zillion strips of colored construction paper (okay, I may be exaggerating a bit; there were more like 30).

While he tossed back some fruit snacks, I used a permanent marker to write one letter of each word from the list onto every strip. Then I scrambled the strips, and handed him the pile along with the stapler.

I told him to lay out the strips so he could see all the letters. Then I read the first word on his spelling list: dog. (The words get progressively harder.) He grabbed a strip with a d, an o, and a g and put them in order. 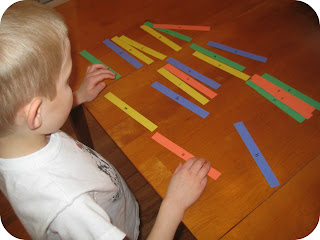 Then I reminded him how to make a paper chain. Just like the blogger had said, he was positively giddy at the mere mention of doing this.

One by one, he worked through each of the words, making several small chains, until the grand finale, when he made yesterday into a chain. “Did I get it right, Mom?” he asked. 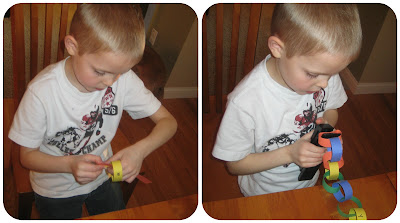 “Yep, that’s how you spell yesterday,” I responded. To which, he exclaimed loudly, “WOO HOO!”

Before we finished for the day, he stretched out the chains, putting them in order from longest to shortest along the table’s edge – yesterday at the beginning and dog at the end. 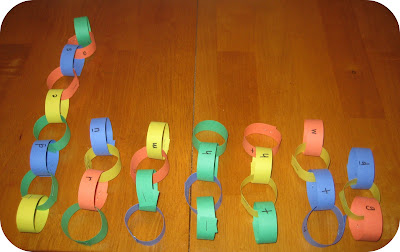 Later that night, he added loops between each word chain to make one very long necklace. I’d wish that he could wear it for his post-test, but after this activity, I just don’t think he’ll need it.

TIP: If you do this activity with your child, be sure to put a line under letters like n and u because if the strips get turned upside down, the letters could easily be confused!

NOTE: It's easy for the letters once added to the chain to appear upside down. I didn't worry about this; after all, it's the spelling and order of the letters that's most important.
Posted by Deceptively Educational at 7:20 AM