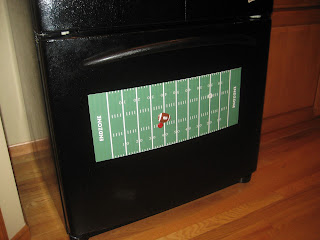 My son is getting pretty good at throwing a spiral and LOVES to support mine and my husband’s alma mater when they take to the field. To give him some subtraction practice, I created a fun magnetic football game.

First, I made and printed a football field onto two pages of sticker paper and attached it to 8 1/2- x 11-inch magnet paper (cost for a 3-pack was about $5 at my local craft store). 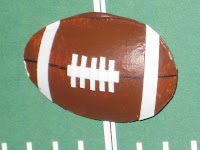 Then I used one of the spoon-molded plaster shapes I had left over from our Beetle Tic-Tac-Toe and Fireflies addition game to make a football.

My son painted it with brown acrylic paint and then I added small strips of white paper for the details using mod podge glue. I used super glue to attach two small magnets to the back.

For this 2-player game, I used two buttons with glued-on magnets to represent each player. (There are no “teams” in this game, just two opponents.) Lastly, I made several cards with subtraction problems of varying difficulty. I also added some lose-a-turn (i.e. interception) and penalty cards.

When my son got home from school, he read a fun, Level 1 easy reader, After-School Sports Club: Touchdown! by Alyson Heller.

Let the games begin! I attached the magnetic field to the refrigerator and put the football and players (aka magnetic buttons) on the 50-yard line.

Once the cards were shuffled, I had my son toss a coin to see who went first: him or me. When he won the coin toss, he drew the first card from the pile, answered the problem, and moved his button magnet toward one of the endzones. (Each card displays the number of yards you earn with the correct answer; it's inside a small football in the lower left corner. More yards are earned for harder problems.) 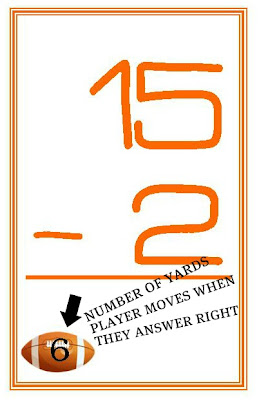 Since the field is marked in increments of two, this proved to be an excellent exercise in skip counting by twos as well as subtraction practice!

The card was returned to the bottom of the pile. Now it was my turn. Play continued like this, with the football being moved next to the button of whoever’s turn it was. My son jumped up and down when either one of us drew the penalty or lose-a-turn cards; he was really into the game! 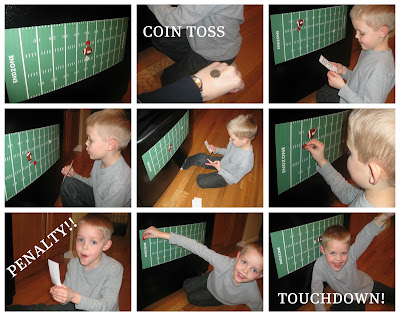 TOUCHDOWN! Whichever player gets his button (and the ball) into the endzone first wins. We played this game three times, until we finally had to stop so I could start making dinner.

When my husband came home, the first words out of my son’s mouth were, “Dad, can we play our new football game?” They played two MORE rounds after dinner!!
Posted by Deceptively Educational at 7:38 AM