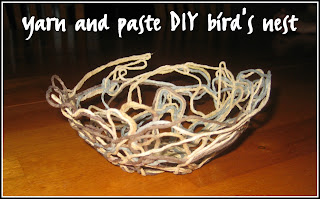 I’m not sure how it came up, but just last week out of the blue, my son mentioned the bird’s nest that we had under our deck this past summer. We were lucky that it had two sets of babies in it – first a robin, and then a squatter who took over when she and her babies vacated. It was so much fun for the boys to peer through the slats in the floorboards down onto the nest filled with eager fledglings.

I suppose it was nostalgia for those sweet moments that motivated this activity. … Well that AND this amazing yarn basket I saw on Homework. (Isn’t that breathtakingly awesome?!?)

If I picked the right color yarn and it wasn’t orderly, wouldn’t our bowl look like a nest, I thought. (Sometimes experimenting is the only way to answer a question like that.)

My son came home from school and we made some paper mache paste, following Carolyn’s recipe exactly as instructed. There was only one problem. I could have mass marketed our nests with the amount of paste we made. If you do this craft, either line up other paper mache projects to follow it, or cut the recipe down by at least a fourth. 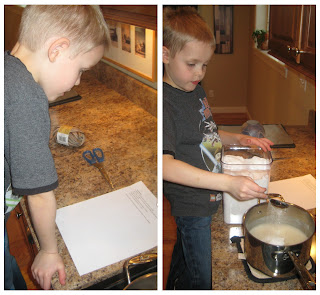 You know what they say: a watched pot never boils. Instead of watching and waiting for the water to boil, we took a small cereal bowl and covered it in saran wrap so that no part of the outside of the bowl was peeking through. Once that was done, we were ready to move on to the next steps in the recipe (which I had my son read). 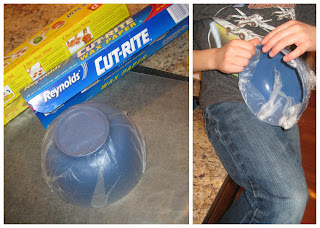 While our paste cooled and thickened, we read a wonderful book that my eyes fell in love with the second they saw it on the library shelf: Birds Build Nests by Yvonne Winer. The illustrations by Tony Oliver reminded me of John James Audubon’s prints. The book features 16 different kinds of nests from birds all over the world.

My son and I LOVED seeing how different they all were and enjoyed trying to guess some of the birds (I got the red-winged blackbird right, my son knew the peregrine falcon; the birds are identified at the back of the book).

When the book was done and the paste was cool, my son unwound a ridiculously long strand of yarn from the spool I’d purchased. Then he dunked it in a shallow bowl of the paste and stirred it, making sure it was completely covered. 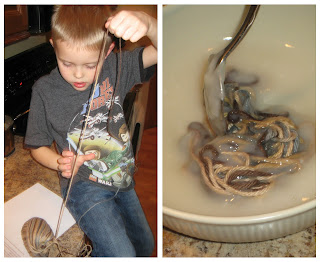 Now, I have to be honest … my son hates having dirty sticky hands. I should have remembered this from our last paper mache project: the dinosaur egg we made. (sigh) But, alas, I had forgotten. It took a lot of coaxing and quite a bit of “assistance” for my son to get the yarn spread over the outside of the bowl. We left the bowl upside down on a piece of waxed paper; in 24 hours our nest would be dry. 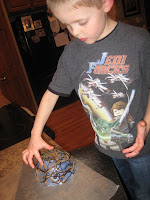 The next day, I wedged a butter knife between the yarn and the saran wrap and eased it off its mold. Voila! Our own version of a bird’s nest! 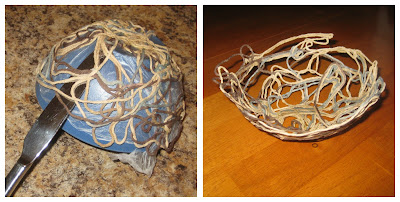 Posted by Deceptively Educational at 7:31 AM