Contractions Down on the Farm 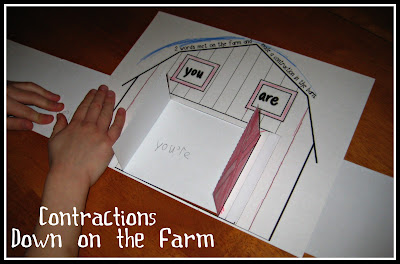 My son reads books with contractions all the time and comprehends the meaning of the story. But strangely enough, he doesn’t know diddley about what the contractions are short for. So I got busy trying to find a way to make this grammar lesson fun.

Denise from Sunny Days in Second Grade provided the inspiration for this activity with her Creepy Contractions post.

I have to also give credit to Brian P. Cleary, the author of the children’s book series Words Are CATegorical. The first time I shared one of his books with my son was during our Noun Clown activity. It was a hit so I knew I’m and Won’t, They’re and Don’t: What’s a Contraction? wouldn’t disappoint.

I was right. The text was not only explanatory, but also whimsical and rhythmic. It was a great introduction to contractions!

After reading, I added two small pieces of packing tape to the windows of a barn I’d designed in Microsoft Publisher and printed on heavyweight cardstock. Download the contractions barn here. 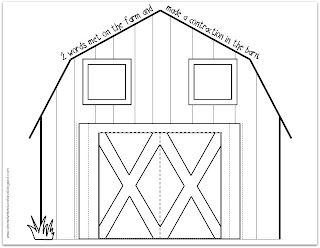 Then I gave it to my son to color. 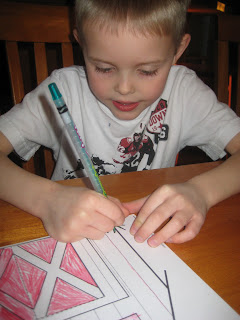 Afterwards, I used an Exacto knife and a straight edge to cut along all the dotted lines and scored and folded open the barn doors. 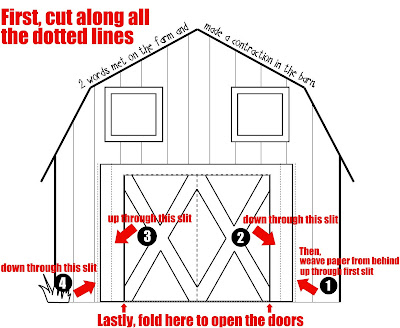 Then I cut two pieces of office paper into strips. The strips need to be slightly narrower than if you’d cut the paper in half. Tape them together end to end, to make one very long strip. 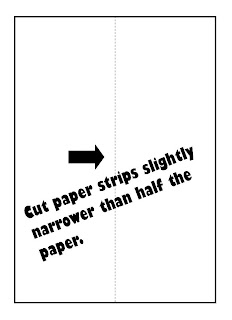 Now weave the strip through the slits on either side of the barn and fold open the barn doors. Grab a fine-tip dry-erase marker and give your child a pencil. You’re ready to start practicing contractions. 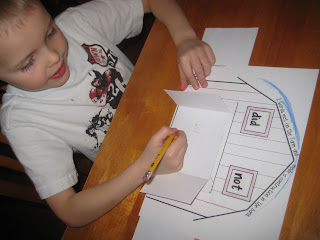 I used a list of contractions I found here. I added two words to the barn, one to each tape-covered window with the dry-erase marker. It was up to my son to figure out what letters to kick out and replace with an apostrophe to transform the two words into one contraction.

When he was done with that contraction, I used a paper towel to erase the dry-erase words, added new words, and he pulled the paper until the space behind the barn doors was blank.

My son caught on quick and was super excited with each contraction he made!
Posted by Deceptively Educational at 7:14 AM