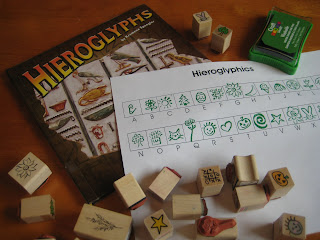 When my son and I got to the sixth chapter of Mary Pope Osborne’s book Mummies in the Morning, a light bulb went off in my head.


The third book in the Magic Tree House series takes Jack and Annie back to ancient Egypt where a ghost-queen asks for their help translating some hieroglyphs.

With a big plastic tub of card-making stamps collecting dust in our basement, I seized an opportunity to put them to use. First I picked 26 small stamps, one for each letter of the alphabet and stamped a key.

Then I stamped a “hieroglyphic” message for my son. Just like in Pope’s book when the code led the two young children to the Book of the Dead, the message my son decoded would reveal a hidden treasure under his bed (an inexpensive toy concealed in a brown lunch sack). I also made a blank sheet so he could stamp his own “hieroglyphs” for his Dad to decode. 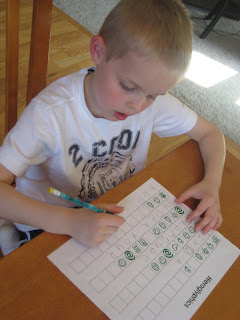 Before my son started to read and write like an Egyptian, though, we read the First Facts book Hieroglyphs by Kremena Spengler.

Posted by Deceptively Educational at 7:22 AM