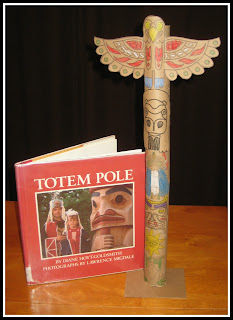 My favorite of all the Native American art is made by tribes in the Pacific Northwest. The transforming masks, button blankets, and totem poles are absolutely incredible! This activity is an effort to give my son his own appreciation for these peoples and their incredible crafts and legends.

Before my son began creating his own miniature totem pole, we read much of the “Carving the Pole” chapter from Diane Hoyt-Goldsmith’s book Totem Pole. This excerpt explained that totem poles are like signs that help pass on legends and stories from generation to generation.

The book is written in first person, from the perspective of a young boy in the Tsimshian tribe, whose father is a wood carver. David explains to readers how his father first makes a drawing, then transfers the drawing to the cedar log before he begins carving.

We looked at the drawing in Hoyt-Goldsmith’s book of the pole David's father planned and then read the meaning of the figures being carved.

Next I gave my son sets of totem pole figures printed from ScissorCraft.com onto brown craft paper (I cut postal mailing paper into 8 ½- by 11-inch rectangles and fed it through our printer to replicate the look of wood). My son selected six drawings, added color to some of the details and then we cut them out. 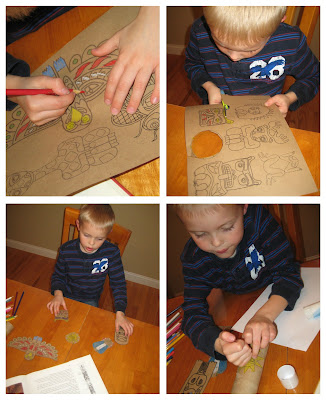 Now I asked him to look again at the picture in the book of the carver’s drawing and told him to move his cut figures around so they would stack vertically well. Next I cut several ½-inch vertical slits in the bottom of a paper towel tube and placed this end of the tube inside another tube, so they would look like one long pole. Next, he applied glue to the back of each figure and placed it on the pole until it was complete.

We looked at pictures of the pole raising in the totem pole book and raised our own pole. To secure in its upright position, I applied a bead of hot glue to the bottom of the pole and set it on a small piece of corrugated cardboard.

Lastly, I gave my son a piece of custom-made handwriting paper and asked him to tell me the story of his pole. His story seemed to take inspiration from “The Old Lady Who Swallowed a Fly.” It began, “The eagle went to catch the frog. The frog went to catch the fly …” Very clever, huh? 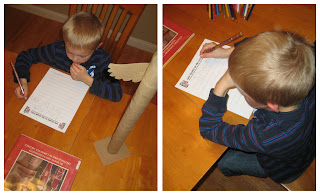 Not only is his pole pretty cool, but he learned about another culture’s art and got a little creative writing practice in at the same time! Fun!
Posted by Deceptively Educational at 7:13 AM