Oceans, Continents, and Directions, Oh My! 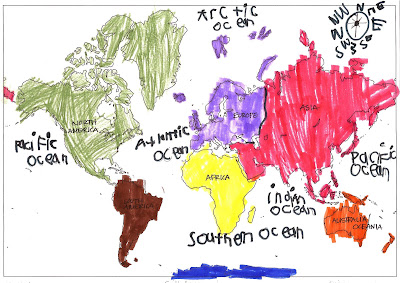 When I purchased a subscription to National Geographic Kids magazine for my son, they sent us an inflatable globe. He has been fascinated with it ever since it was filled with my husband’s hot air.

All on his own he began asking me to name a country for him to find. Of course, I didn’t hesitate to honor his request, even writing some of their names down so he could find them easier. When he had trouble, I found myself saying things like, “Look in North America,” “It’s a country in Asia,” or “First find Africa.” Each time, all I got was a blank stare. My son didn’t know the seven continents!

This activity is meant to fix that.

To start, we read a great book that shared information about the terrain, location, peoples, and animals on the Earth’s seven different continents.

Afterwards, I gave my son a printed map of the earth with no labels. I had written the following on the bottom:
North America – green
South America – brown
Europe – purple
Africa - yellow
Asia – red
Australia/Oceania – orange
Antarctica – blue

I asked my son to identify the continents from memory and color each according to this key. He remembered North America, South America, and Antarctica but needed to review Bobbie Kalman’s book again for a refresher to label the others. (And all the little islands off the coast of the continents, which continent do those belong to? We definitely needed the book’s map to answer those questions!) 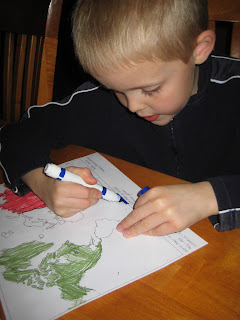 When my son had color-coded all seven continents, I added their names and had him draw a compass rose on his map. Then I gave him directional clues to help him label the oceans. I said things like “The Pacific Ocean is west of North America” and “The Indian Ocean is south of Asia.” (I helped him with the spelling until all five oceans were added.)

I could tell he was proud of himself. At bedtime, I told him he had five more minutes to look at books before it was ‘lights out.’ He asked to look at his new map instead!

Our continents activity was inspired by a blog post over at 2 Love Learning (if you haven’t stopped there, do!).
Posted by Deceptively Educational at 7:36 AM