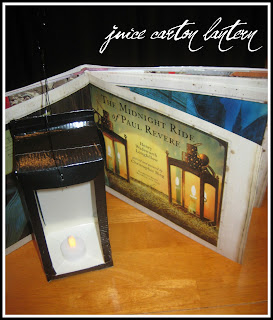 There’s something to be said for a legend … and a great poem … and transforming junk into a craft. The combination of these three things puts this activity among my favorites.

My son’s class of first graders is learning about early America, the Declaration of Independence, the flag, etc. So when I saw Phyllis’ post over at All Things Beautiful, I knew a lesson in Paul Revere’s ride would fit right in with the history my son was being exposed to at school.

It’s been ages since I read Henry Wadsworth Longfellow’s poem, The Midnight Ride of Paul Revere. I did remember the line “One if by land, two if by sea,” though. And I had a sneaking suspicion that my son would light up (pun intended) at the idea of using lanterns in a church tower as a signal.

Before we got crafty, we read Longfellow’s poem. The book I chose has amazing illustrations that practically have readers holding their breath with suspense, feeling the damp night air, and hearing the whinny of Revere’s horse.

When reading, I stopped periodically to put the poem in layman’s terms for my son. Despite the complex language, he was engrossed.
When we finished the poem, I gave him an empty orange juice carton and told him it was time to make a lantern similar to the ones used to signal Revere.

First he traced some rectangles on each side of the carton. Then he cut them out. Lastly, he covered the lantern in black duct tape.

I punched a few holes in the lantern on opposite sides. 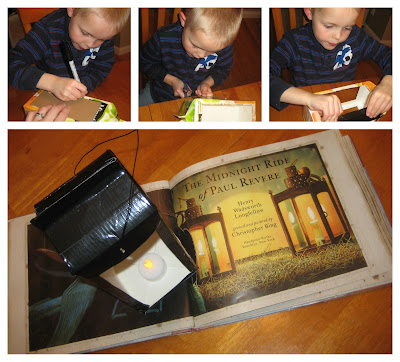 To make the “glass,” he cut some pieces of vellum paper and I glued them into three of the windows with a few dots of low-temp glue. We left one window in the back open.

Then I had my son thread wire through the holes and twist it together on the inside of the lantern for a handle.

All that was left to do was add a flickering flameless tealight!

Posted by Deceptively Educational at 7:59 AM