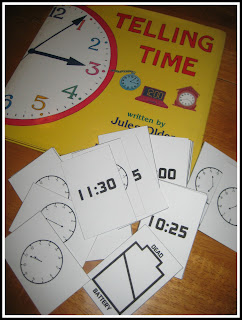 Before my son’s last playdate with his best buddy, I must have answered “what time is it now, Mom?” and “how much time before he gets here?” a zillion times. (sigh) Finally, I reminded him that he could tell time, too.

I had to jog his memory about which hand told the hour and minutes, but otherwise, he patiently counted by fives around the clock to tell the time in minutes.

To develop his time-telling skills even more, I made a time-telling card game based on Old Maid. I created 33 cards, 16 of which are analog and digital clocks with the same time and 1 dead battery card.

After printing on cardstock and cutting them out, we were ready to play! ... Well, almost.

First, we read Telling Time by Jules Older, who did a MUCH better job of identifying digital and analog clocks and explaining each hands’ function on the analog clock than I did.

After we’d finished the book, I shuffled and dealt the entire deck to my son and I. (The cards won’t divide evenly; that’s okay.) When my son had all of his cards, I told him to lay them out so I could help him find the digital and analog clocks with the same times. I did the same thing with my hand and those matches were set aside. 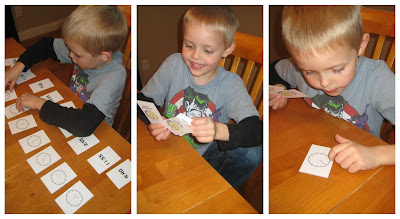 Then we held our cards and picked one card from each other’s hand, alternating turns, matching the clocks and putting the pairs aside. The objective is not to get stuck with the dead battery card. The player left holding that card is the loser.

My son LOVED playing the “Time is Running Out” game I'd made and, with each game we play, seems to be getting better at reading the clocks.

Remove the dead battery card from the deck, and play these other fun children’s games:
Go Fish!
Memory
Posted by Deceptively Educational at 7:23 AM