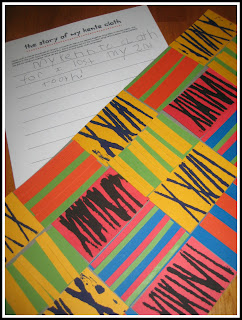 AB, AAB, ABC, ABB … if you’ve ever worked with a child on patterns you, no doubt, recognize these. Frankly, I think some of the traditional pattern-practice activities are a bore [yawn]. I wanted a fun way to keep my son engaged as we worked on creating and recognizing patterns. When I stumbled across a picture of Kente cloth (fabric woven by the peoples of Ghana, Africa), a light bulb went off.

To start our activity, I Googled Kente cloth and clicked on “images.” I showed my son all of the different pictures and told him we were going to replicate the look of Kente cloth with an art project. He was game.

Earlier in the week, I had my husband cut two rectangular blocks of wood the same size from a 2x4. (If you replicate this activity, don’t feel like you need to use wood. Anything that is hard, shaped like a rectangle, and could get paint on it would work.) I cut lots of cardstock rectangles from five colors of cardstock in the same shape as our blocks of wood.

Then, I had my son wrap the two blocks of wood in yarn. I tied the two ends together on the back of the blocks, he applied acrylic paint with a sponge brush, and stamped the yarn prints on two different colors of cardstock. My son was blown away at how cool these homemade stamps were. (Okay, who am I kidding? I was too!) I got the idea here. 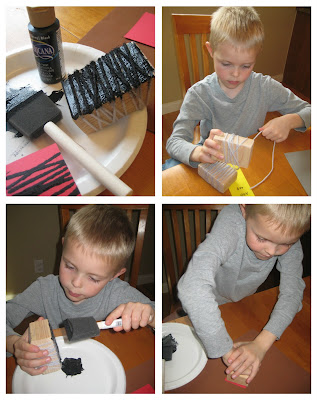 When he had stamped eight blocks of each, we moved on and began making our patterned blocks in the following configurations:
AB
AAB
ABC
ABB

Each strip of our Kente cloth would have blocks with one of these patterns. I cut the cardstock rectangles into horizontal or vertical strips and my son glued them on. When he’d created two or three blocks with the pattern we were making, we glued our blocks onto a big piece of paper in an AB pattern, alternating with the stamped blocks. 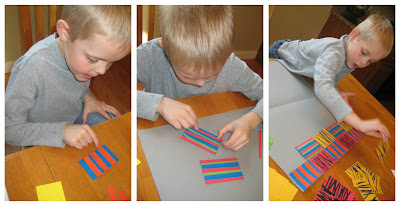 This took a long time and a lot of thinking. My son, who isn’t normally the patient type, stuck with it until all four strips were done and glued onto our plain paper. He was captivated by how the patterns all came together! 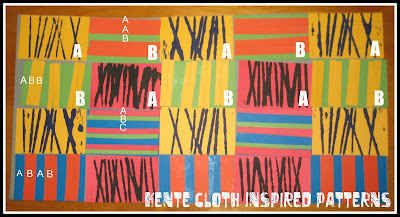 When it was done, I had him explain the meaning, symbolism, or significance of his Kente cloth design by completing a custom-made handwriting sheet I created. I had to smile at his explanation: the cloth he made commemorates losing his second tooth!

Posted by Deceptively Educational at 4:06 PM