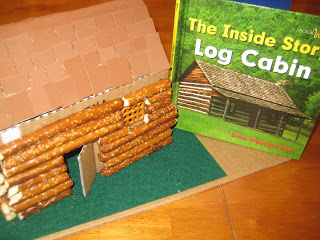 Have you ever noticed that those long pretzel rods kind of look like logs? I did and I couldn't let that little discovery be wasted. Knowing how my son loves building stuff out of LEGOs, Fisher-Price TRIO blocks, etc., I knew that this little construction project would be a big hit.

While he was at school I rescued a cardboard box from the recycling bin and cut it into a base, onto which we'd be gluing our logs (aka pretzel rods) to build a "log" cabin. Here are the dimensions I used (click on the picture to enlarge):

The only dimension that's truly important is the length of your log cabin's long sides. To save yourself the trouble of splitting your logs, it's easier to make this the same length of the pretzel rods.

You'll also want to cut another piece of cardboard the same length as your long walls (7 3/4 inches if you're using my measurements) or slightly longer by 4 or 5 inches wide for the roof. (You can cut this in two and tape back together or crease it heavily in half to make the roof.)

After school, I handed my son a book by Dana Meachen Rau about log cabins to read. Not only did he discover that log logs go on each side of the cabin with shorter logs used on the ends, but he also expanded his vocabulary learning words like "notches" and "shingles."


When we finished the book, I gave my son the cardboard and a small low-temp glue gun. After lecturing him that he needed to be careful, my son glued the small 2-inch flap to enclose the house. Then he peeled the backing off a green piece of felt and stuck it to a flat rectangle of cardboard I had leftover from the box I used. He glued around the bottom of the cardboard cabin and placed it on top of our "grass." Now it was time to get building. 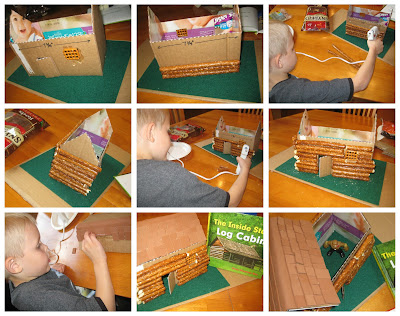 While the traditional approach to log-cabin building requires that the logs be notched, we skipped that step and just got busy gluing the long pretzel rods up the side of our log cabin. When we did the short sides, he just broke the pieces to the approximate length. Be warned, there'll be LOADS of sawdust (aka crumbs) on the construction site.

If you like pretzels like we do, plan ahead and buy two bags of pretzel rods (we ate too many and ran out!). Get creative with what you shingle your roof with. I had plans to use Wheat Thins, but when I went to get them from the pantry, there were only five or six left in the box (apparently they make an even better snack than a roof). Instead we used rectangles cut from brown craft foam that we overlapped.

Since I knew the log cabin would get played with a lot, we didn't glue the roof down. Sure enough, as soon as we were done, my son was off to get some of his Imaginext figures and dinosaurs (which perplexed me) to play in and around the cabin.

As I tidied up, my son asked for some paper. Of course, I obliged. I nearly fell over when I saw what he did next: he wrote a story about the dinosaurs wanting to go in the cabin and the Imaginext dude hiding there! 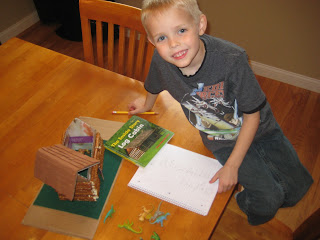 That story made cleaning up all those crumbs and gluey strings worth it for sure!

Posted by Deceptively Educational at 7:15 AM