How to Make a Thunderstorm

When a follower e-mailed and told me that her son was fearful during thunderstorms, I was inspired to help. Most of my fears as a child stemmed from the unknown. And with all the mystery surrounding the weather, it’s no wonder so many kids are scared. These activities, as well as the others featured this week on clouds and the water cycle, are meant to demystify the weather. The following are three ways my son and I tried to replicate what goes on in a thunderstorm.

LIGHTNING
Our experiment started with a clay monster. A house made out of modeling clay would probably have made more sense. (But that’s what I get for giving a 6-year-old choices.) We attached several 'lightning rods' (paper clips or safety pins) as hair. Then, I blew up a balloon, grabbed a wool coat, and we headed into a windowless room. 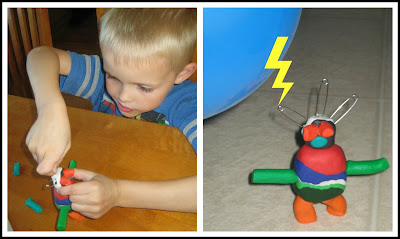 After vigorously rubbing the balloon against the wool (roughly 30 seconds), I held the balloon near the monster’s hair and, after several tries, we not only heard the crackle of our lightning, but saw it jump from the balloon to the metal. It was SO cool!!

I found the directions for homemade lightning on the Disney Family Fun site. TIP: Don’t blow the balloon up too full; a smaller balloon is easier to hold.

THUNDER
While I typically like to make popcorn the way my grandparents did on the stovetop crankin’ a handle until the pops have stopped, a microwave is a quicker way to ‘make thunder.’ Before I nuked a bag of unpopped popcorn, I explained to my son what happens during a storm. The following is an excerpt from Darice Bailer’s book Why Does it Thunder and Lightning? It seemed like a perfectly simple explanation for thunder:

The electric current that flows through the sky heats the air so fast that the air explodes. The explosion causes a rumbling or a loud BOOM in the sky.

I told my son that the microwave was going to make an electric current, similar to the one flowing through the sky during a storm. Then we listened for the noise created when the air inside the microwave was heated up quickly. 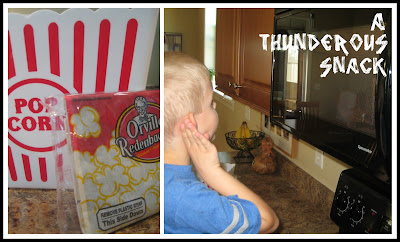 It wasn’t long before we heard our ‘thunder’ (the popcorn popping). What a yummy lesson! 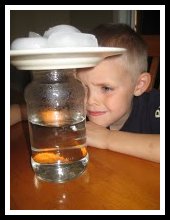 Making rain inside of a jar was a simple extension of the condensation experiment we did during our water cycle lesson. I first read about this experiment on I Can Teach My Child, one of my favorite blogs. It's pretty simple.

Heat water until it's almost boiling. Pour some of the water into a clear glass jar. Put a plate on top of the jar and add ice cubes to the plate. Wait a few minutes and then watch inside as the condensation builds and streaks of water pour down the sides of the jar. It’s raining in there!
Posted by Deceptively Educational at 7:23 AM