Learning About Nouns with Noun Clown

My son brought home worksheets from his reading/writing summer camp on the parts of speech. I must admit, his grasp of nouns, verbs, and adjectives made this Mama-With-An-English-Degree cringe a bit. I quickly reminded myself that he’s only six and until someone TEACHES him the differences, he’s not libel to just figure it out. This activity is my attempt at making learning about nouns fun. 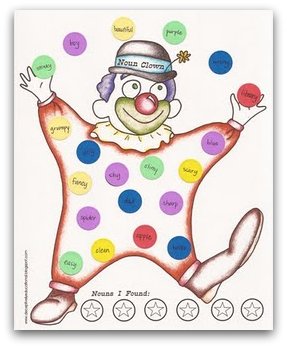 To start, we read Brian P. Cleary’s hilarious book, A Mink, a Fink, a Skating Rink: What is a Noun? If you’re exploring parts of speech with your child, I highly recommend putting his "Words are CATegorical" series in your library cue.


This book had me after its first three sentences: “Hill is a noun. Mill is a noun. Even Uncle Bill is a noun.” Not only does the cadence of the rhyming text beg to be read aloud, but the illustrations are whimsical and silly. 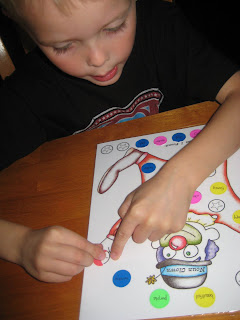 Then I gave my son the laminated Noun Clown. Covering all the polka dots and juggling balls were ¾-inch sticker dots with words on them. Six contained nouns; the rest were adjectives. The noun stickers covered circles with stars in them. The other circles (with adjectives written on the stickers covering them) were empty.

My son’s task was to read the words and determine if the word was a person, animal, place, or thing (i.e., a noun). If he thought it was, he peeled the sticker back. If a star was revealed, he’d guessed right and could place the sticker at the bottom of the page under the “Nouns I Found” heading.

My son had a few wrong guesses but overall did great and loved peeling back the stickers to look for stars. The more we work with Noun Clown, the better he'll get; I'm sure of it.

I made six templates, moving the stars around so we could practice this multiple times. Download the Noun Clowns here.

NOTE: This is not an activity to do just after you’ve trimmed your child’s fingernails. Avery Color Coding Labels (¾-inch diameter) pulled away much easier than Target’s UP & UP brand and the darker dots work best since the stars don’t show through.
Posted by Deceptively Educational at 7:02 AM