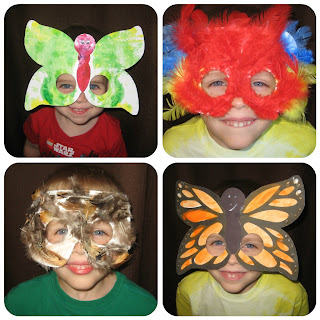 Lately my 6-year-old son can’t get enough of the Kratt brothers’ animal adventures on the PBS show Wild Kratts. This animated show has taught my son a bounty of facts about animals such as the Draco Lizard, Kangaroo, and Large-Mouth Bass. His favorite episodes, though, have got to be the two that focused on the Monarch Butterfly and Peregrine Falcon.

To capitalize on my son’s interest in these two amazing creatures, I created some eye-mask templates for him to decorate. I printed these on white cardstock. To create holes for the eyes, I used my Martha Stewart Punch All Over the Page™ 1 ½-inch circle punch. If you don’t have a punch, the circles can simply be cut with scissors.

I bought an assortment of feathers at our local craft store (I couldn’t resist buying some bright ones as well as the more typical brown/grey/white packages). My son applied white school glue all over the mask and placed feathers atop the glue, being careful not to cover the eye holes. Then we glued a 1 ¼-inch strip of cardstock to the middle of the back of the mask above the eye holes; about a two-inch long line of glue will do.

Once the glue was dry, I trimmed excess feathers around the eye holes and nose area (my son said it kept tickling him) and stapled another 1 ¼-inch strip of cardstock to the other strip, measuring the distance around my son’s forehead to make the headband fit properly.

Little brother was dying to get in on the action when he saw his brother’s falcon mask. I folded the printed butterfly template in half and taped it down. I gave my 2-year-old some fingerpaints and encouraged him to unleash his inner artist. 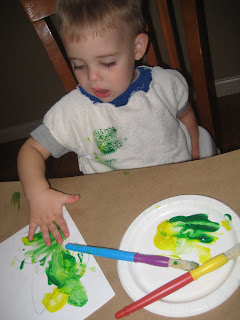 When he was done, I removed the tape, and folded the paper back in on itself so the mirror image of his painting would appear on the other wing of the butterfly. Then we let it dry.

Both boys then used watered-down craft acrylics to paint the monarch butterfly templates I printed. 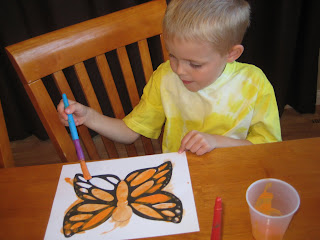 When the paint was dry, I used the generic butterfly template to draw circles on the back so I knew where to punch the eye holes out at. Then we attached the butterfly bodies, which were either painted in alternate colors or cut from construction paper. The googly eyes, pipecleaner antennae, and smile are optional. Let your child decide!

Simply glue on a 1 ¼-inch cardstock strip, stapling another strip to it once dried for added length and fit to your child’s head. 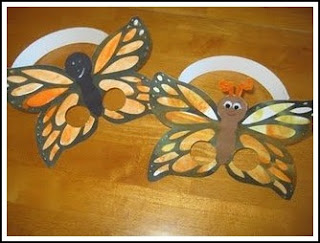 And then let your bird and butterfly girls and boys fly free!
Posted by Deceptively Educational at 7:12 AM