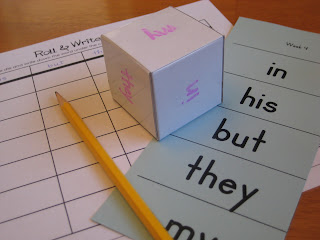 It’s happening – homework! Soon after my son began first grade, he started toting home a list of five words each week. I’ll admit, I wasn’t sure what to do with them. After all, my son could read them without any difficulty and so I just tossed the lists in our mail/bills/household paperwork pile (please tell me we’re not the only family with one of those).

Then a friend whose boy is my son’s best friend enlightened me. Just because my son could read those word-wall words, doesn’t mean he could spell them. Yikes! After mentally beating myself up for a few days, I came up with this little “reusable” activity so those weekly words could get practiced.

First, I made a dry-erase die. To do this, I created a template with squares the same width (2 inches) as Scotch brand packaging tape. I printed it on sticker paper. Then I used post-it notes to mask off the flaps where I’d be gluing the little box together (I didn't think the glue would stay adhered to the slick tape). I added the packaging tape and anywhere that the tape overlapped a sticky note, I carefully lifted the edge of the note and cut along the edge with an Exacto knife.

Afterwards, I peeled the sticker paper's backing off, and stuck the template to the brown side of an empty cereal box I used for sturdiness. Then I cut the whole template out with that same Exacto knife, using a ruler as a straight edge and a cutting board underneath to protect my work surface.

Once it was cut out, I turned it over and used a ruler and the backside of a butter knife to score the cardboard wherever folding was necessary. Lastly I used my hot glue gun to glue the flaps one or two at a time and folded the box together until the template became a cube. Voila! The tape makes a perfect dry-erase surface! 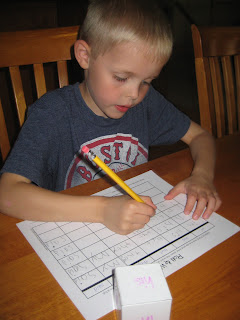 Next, I used Microsoft Publisher to create a worksheet that has a grid where my son would record the words he rolled.

When my son got home from school, I wrote the words from the list plus one more (die have six sides and I only had 5 words) with a fine-tip dry-erase marker on the die. I also added the words across the top of the worksheet.

Now all that was left to do was hand it over to my son.
Every time he rolled a word, he wrote it in the appropriate column. When any one column was completely full, he was done. Surprisingly the dry-erase words held up well, without much smearing. 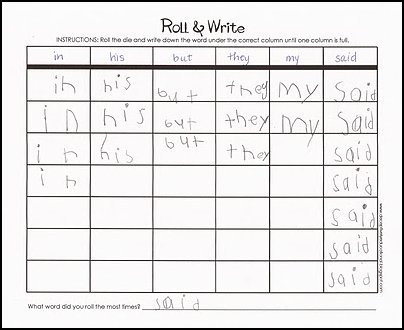 My son had loads of fun with this and enjoyed predicting which word he would roll the most times. Whew! Now I can look his teacher in the eye!
Posted by Deceptively Educational at 7:19 AM