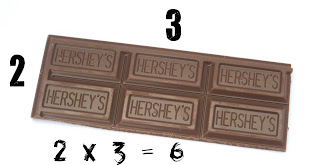 Can a first-grader really do multiplication? I thought I’d find out. My son loves math, candy, and books so this activity was right up his alley.

If you recreate this activity with your child, you need three things:

#3 The “Draw it, Count it, Multiply it” worksheet I made (download it here). 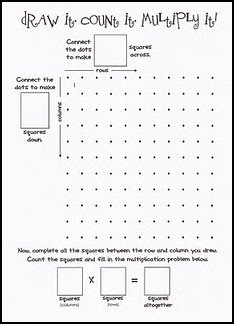 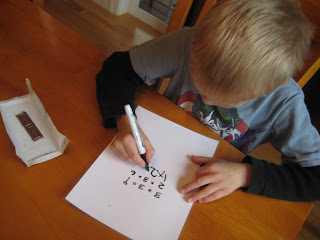 I’m not going to lie, we both ate a fair amount of chocolate doing this activity (MMMMmmmm).

After doing this for awhile, we flipped over the laminated worksheet I’d made. I used a fine-tip dry-erase marker to fill in the boxes at the top and asked him to make that number of squares across and down and complete all the boxes in between. When he’d done this I asked him to complete the multiplication sentence at the bottom of the page and reminded him about what he’d drawn (e.g. 3 rows of 5 squares equals how many squares altogether?). We did about 5 problems before quitting for the day. 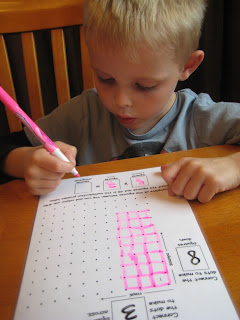 TIP:  Avoid using a black dry-erase marker. Ours made it difficult to distinguish where the dots were and make the squares. After discovering this, we switched to a lighter color marker.

Even if it was a little advanced for a six-year-old, my son loved this introduction to multiplication (it wasn’t just the chocolate he enjoyed, I swear!). This is a skill we can easily build on and, by laminating the worksheet, we can just wipe it clean to practice over and over!

In the future, I think I'll use a die to help us decide which numbers to multiply. Since this is new to my son, keeping both numbers below six will work great.
Posted by Deceptively Educational at 7:33 AM