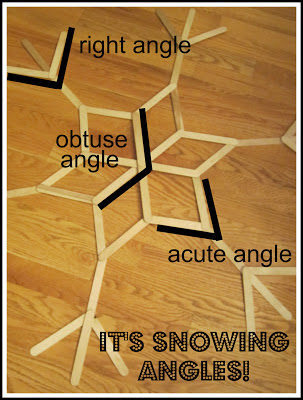 Have you ever looked at a snowflake? It's made up of a TON of angles!

While we have yet to see a flurry of white flakes falling where we live, that doesn't mean that a little winter weather-inspired math practice wasn't in order.

My son has learned right angles at school but that's it. I figured we could step it up a notch. I gave him a protractor and watched for curiosity to sweep across his face.

Sure enough, it did.

Now, I handed him red, blue, and green markers and a page with four snowflakes.

Time to find and color the three different kind of angles. This took some practice and even though it was hard, I knew it was a success when my son said, "You know, this is kind of fun!" 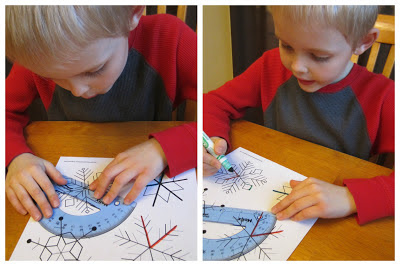 When he grew tired of coloring angles, I got out a package of jumbo popsicle sticks and told him it was time for us to make a snowflake. This amazing math craft is the sheer genius of Peggy Banks over at DIY Crafty Projects.

With a low-temp glue gun and the protractor in hand, we gradually glued together the sticks to form a giant wooden snowflake. During its construction, I asked loads of questions to get him thinking (e.g. "So is that an ACUTE angle or a RIGHT angle?"). 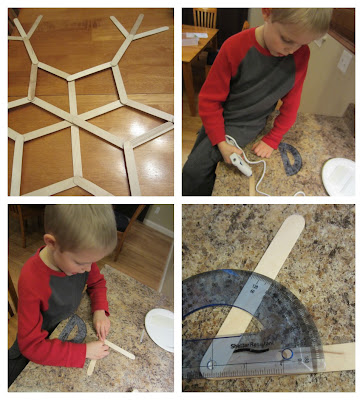 Peggy's instructions at DIY Crafty Projects are amazing. Follow her tutorial here; she shows you step-by-step how to make several different shaped snowflakes.

Once it our snowflake was complete, I sprayed it with red spray paint and red glitter spray; then when it was dry, hung it in the window with fishing line. 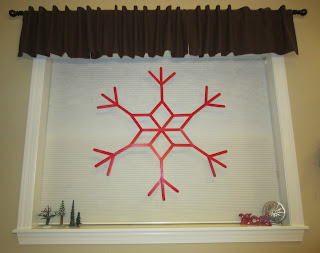 Not only is this a beautiful addition to our holiday decor, but it's a month-long reminder of our afterschool angles lesson! Now that's what I call a real win-win.
Posted by Deceptively Educational at 7:35 AM