Fractions can be challenging for kids. I thought I'd see how my 10-year old son would do multiplying fractions. 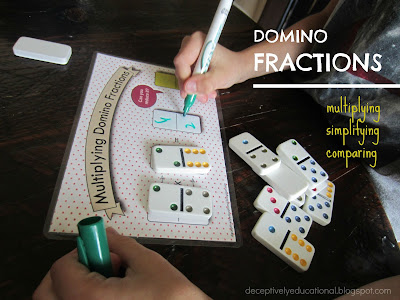 I made some fun game cards, which I laminated, and got out our set of dominoes and two dry-erase markers. I put the doubles aside (i.e. six six, four four, etc.) and turned the rest of the dominoes upside down on the table. 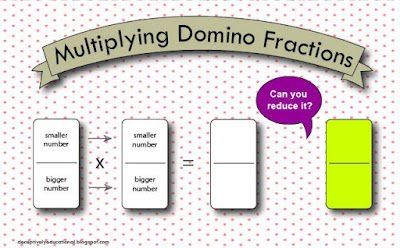 He drew two dominoes from the pile and placed them on the game card. 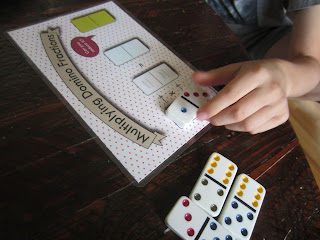 Then he multiplied the numerators and the denominators, writing the numbers on the card with a dry-erase marker. Stumped? Watch this great video from Khan Academy. 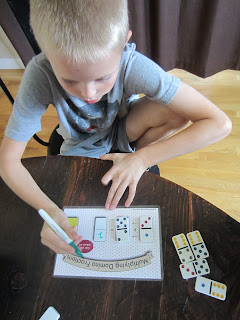 Lastly, my son reduced the fraction to its lowest terms, if he could.

Now it was my turn. I did the same thing with my game card. Lastly, I asked him to compare our final answers. Whose fraction was bigger? 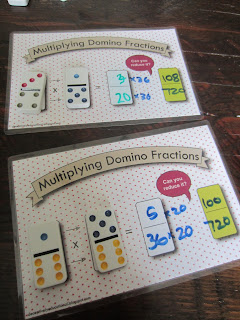 If it's not readily apparent, we looked for a common denominator. Confused? Watch another Khan Academy instructional video; this one is great!

The player with the largest fraction takes the four dominoes. With a limited set of double six dominoes, we were able to play three rounds.

With the cards laminated, the dry-erase numbers you add can be wiped clean with a paper towel.

The player with the most dominoes in the end wins. My son really enjoyed this and asked to play it again; it's fun skills practice!
Posted by Deceptively Educational at 6:00 AM