How to Make a Balloon Whir (Sound Science)


I love it when a science lesson takes zero prep and no money. This little experiment was conducted with supplies we already had around the house:

Here's how we made an average party balloon whir like it had a motor. 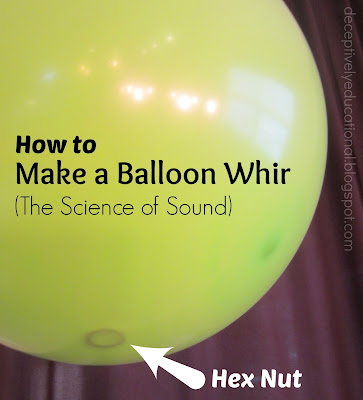 Step 1
Put the hex nut in the balloon. Make sure it drops all the way in. 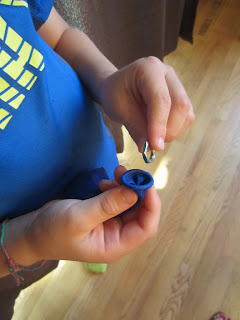 Step 2
Blow up the balloon, while still holding it down. Do this to avoid any possibility that the hex nut will be sucked back into your mouth while blowing it up. (Parents: This would be a GREAT step for you to do!) 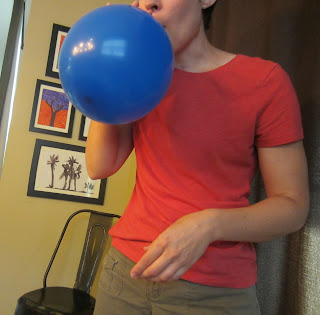 Step 4
Grab the balloon with your whole hand. (Holding onto the tied knot won't work.) Imagine you're holding a bowling ball, except it's a balloon.

Step 5
Move the balloon in a circular motion. You'll hear the hex nut bouncing around inside for awhile, but soon enough, it'll start whirring like your balloon has a motor inside it!

The sound is so intriguing. My youngest son and I did this and in seconds my oldest son was begging for his own balloon and asking, "how did you DO that?!?"

We also put a small glass marble in a balloon to see if it too would whir. No such luck! My 9-year-old had a great hypothesis about why the marble didn't make the same sound.

How does it work?
The balloon's shape forces the hex nut to move in a circular motion; this is centripetal force in action. Because the hex nut has straight sides, the nut vibrates as it moves inside the balloon. This vibration is what makes the whirring sound.

When we tried the marble and there was no whirring, we were able to deduce that it was due to the hex nuts' sides!

This great activity came straight out of the pages of Steve Spangler's book Naked Eggs and Flying Potatoes. Not only does it contain LOADS of totally doable at-home science experiments, it also contains great photos, and thorough explanations behind the science of each. We highly recommend it!