My boys and I had a lot of fun learning about Leonardo da Vinci, Renaissance painter, engineer, musician, etc. Our lesson consisted of three simple activities.

Normally, my oldest son groans when I even mention art, but this time I promised him that although we were learning about a legendary artist, we wouldn't be making any of our own. He was game.

To start we read a phenomenal book by Jean Fritz. Leonardo's Horse provides some great background on the artist and then discusses the bronze horse commission he died still dreaming about. It goes on to share how Leonardo's unfinished work became the purpose and wish of Charles Dent, an airline pilot and art enthusiast, who intended to finish da Vinci's work from 500 years earlier. The book was a little advanced for our five year old, but the nine year old was positively enthralled.

No. 1  Backwards Writing
One of the phenomenal facts shared in Fritz's book was that Leonardo could write backwards, from the left side of the page to the right, making it nearly impossible to read without a mirror.

For my oldest son's first activity, I gave him a list of da Vinci facts with the writing inverted left to right. Download the 1-page PDF here. 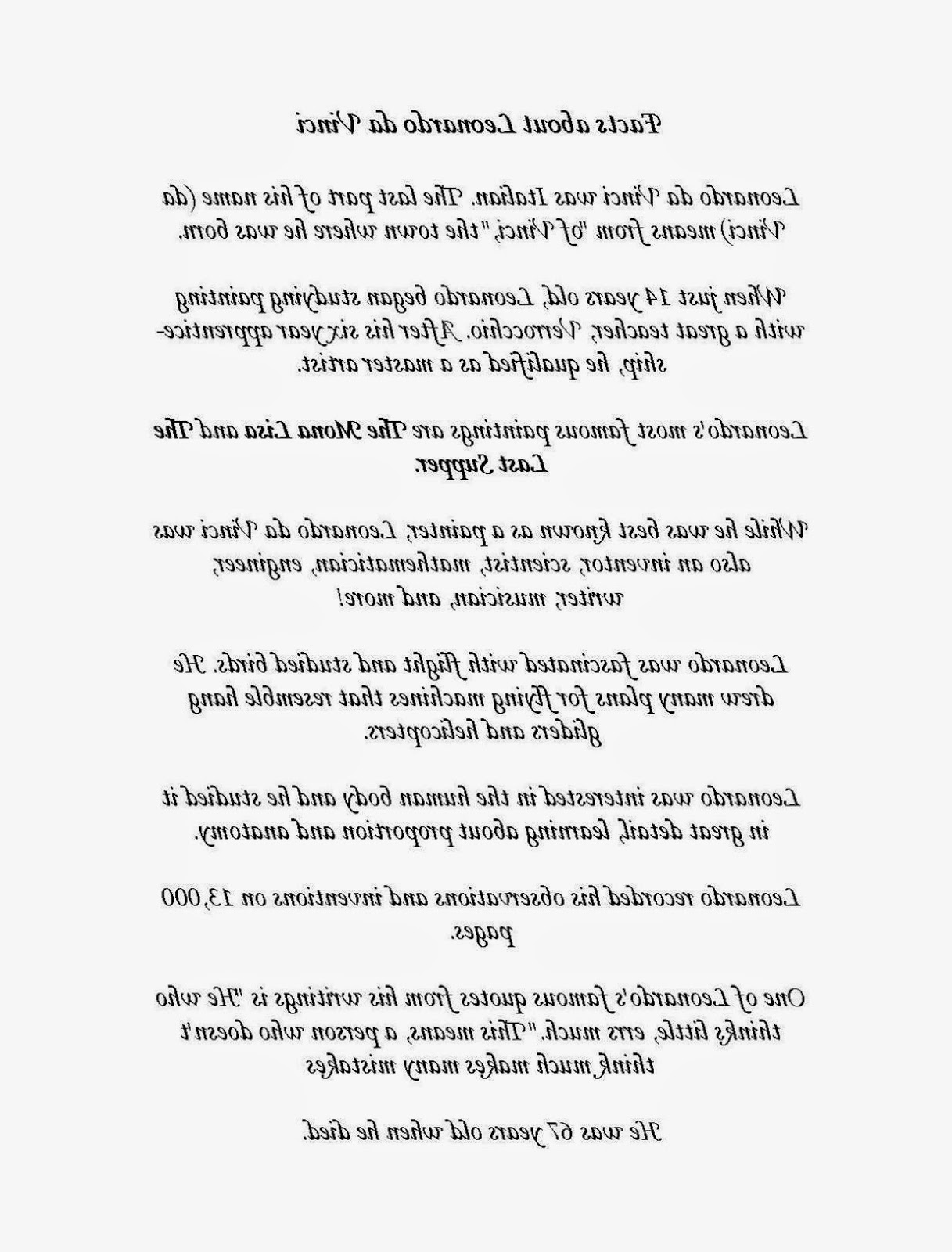 At first he was confused. "I can't read this. It's in another language!" But upon further study, he realized what it was, so he quickly ran to the mirror. 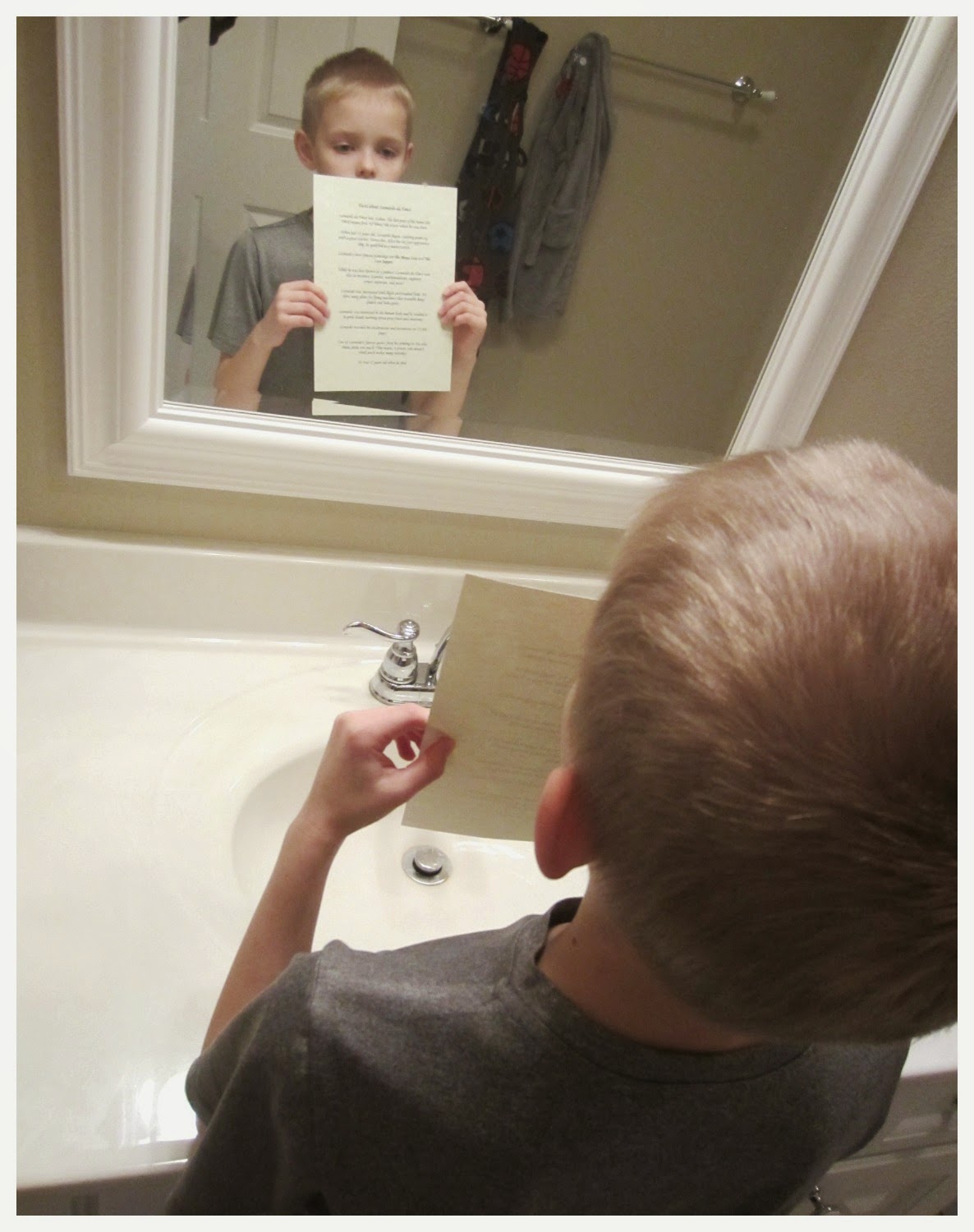 No. 2  Studying Body Proportion
Leonardo was fascinated with the anatomy of the human body and its proportions. I showed my sons the picture of his Vitruvian Man in Fritz's book. Then I grabbed a measuring tape. I asked my oldest son to hold his arms straight out from his sides. My youngest son measured his brother's arm span from finger tip to finger tip. Now we measured his height. The numbers were the about same! 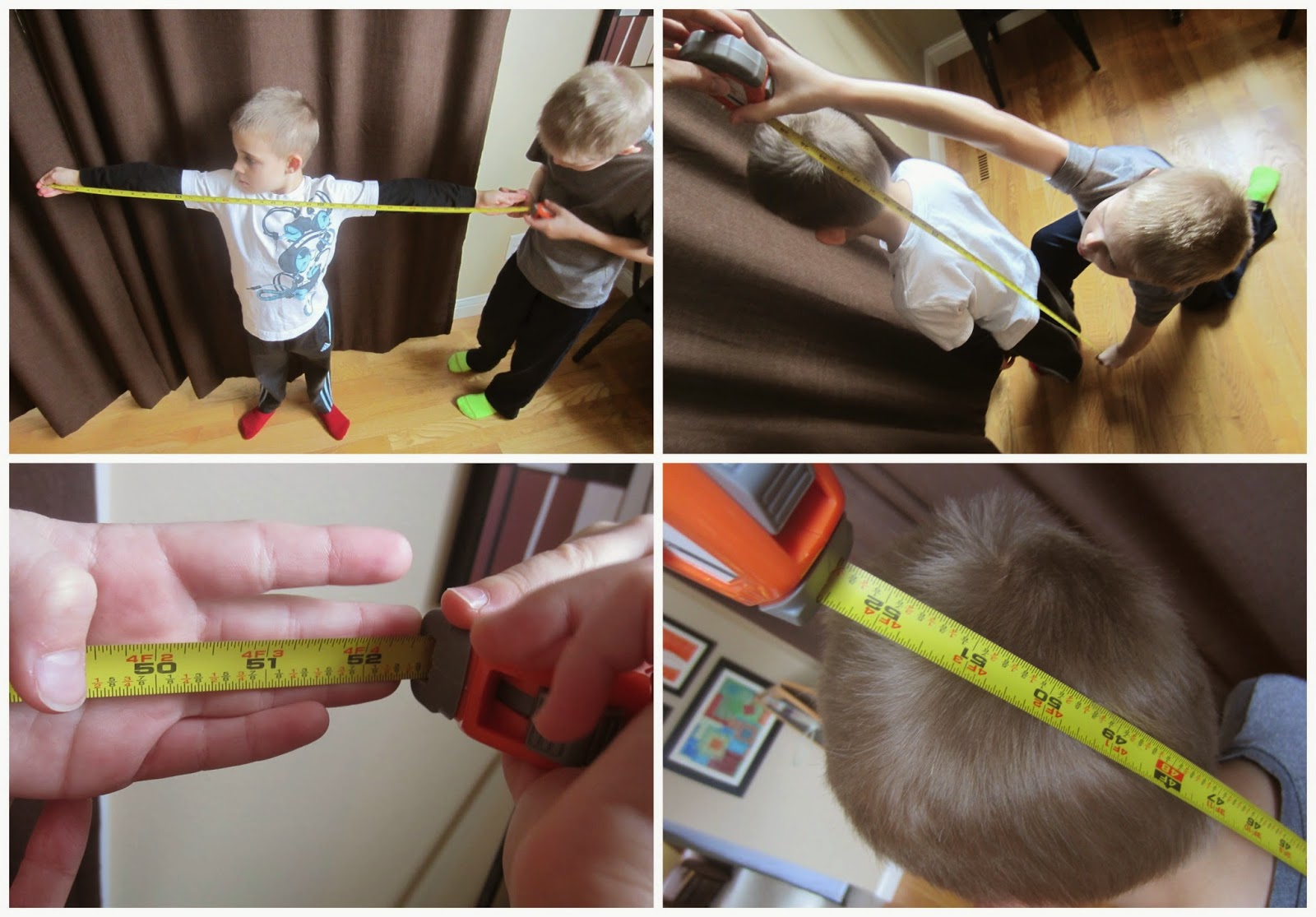 Another marvel of the human body is that our feet are the same length as the distance between our elbow and our wrist. The boys are pretty flexible and so the measuring tape was not needed to see that in fact, your foot fits perfectly in that space! 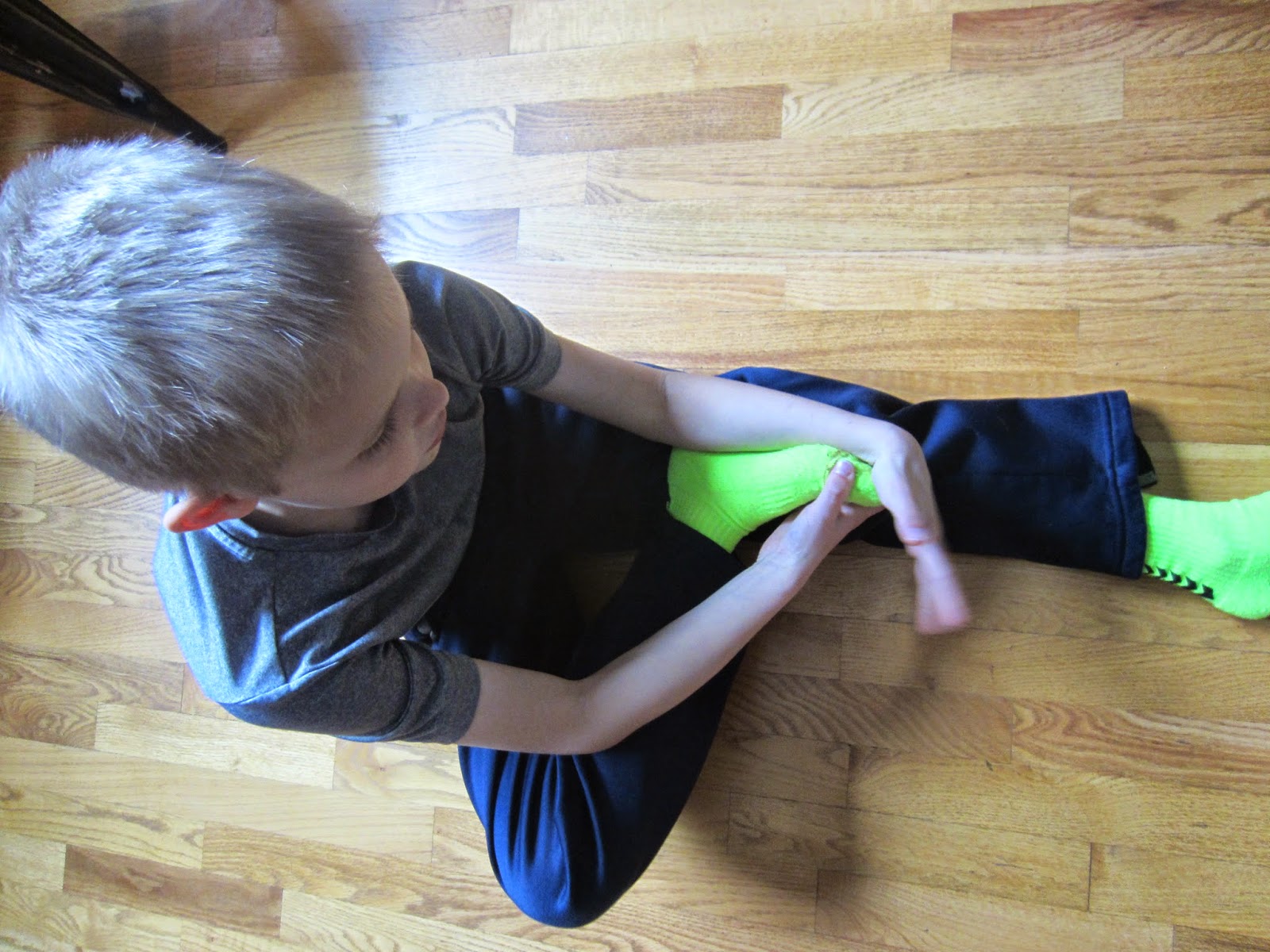 No. 3  Chocolate Casting
Since a fair portion of Fritz's book talks about the process of bronze casting, I thought it would be fun for the boys to have their hand at it … but with chocolate. First we filled a small plastic container with brown sugar and packed it down tight. Then we pressed some square candies (sort of like Starburst) into the sugar to make a mold.

Before we inserted them, we added toothpicks to make them easier to remove. When pressing down, we applied pressure to the the square candies (not the toothpick as it would have poked right through) until the tops of the candies were level with the sugar. Lastly, we melted chocolate chips on the stove in a double broiler and poured it into the cavities left by the removed candies.

After a short time in the refrigerator, we removed our chocolate squares and dusted off the extra sugar. Then we popped them in our mouths. YUM. 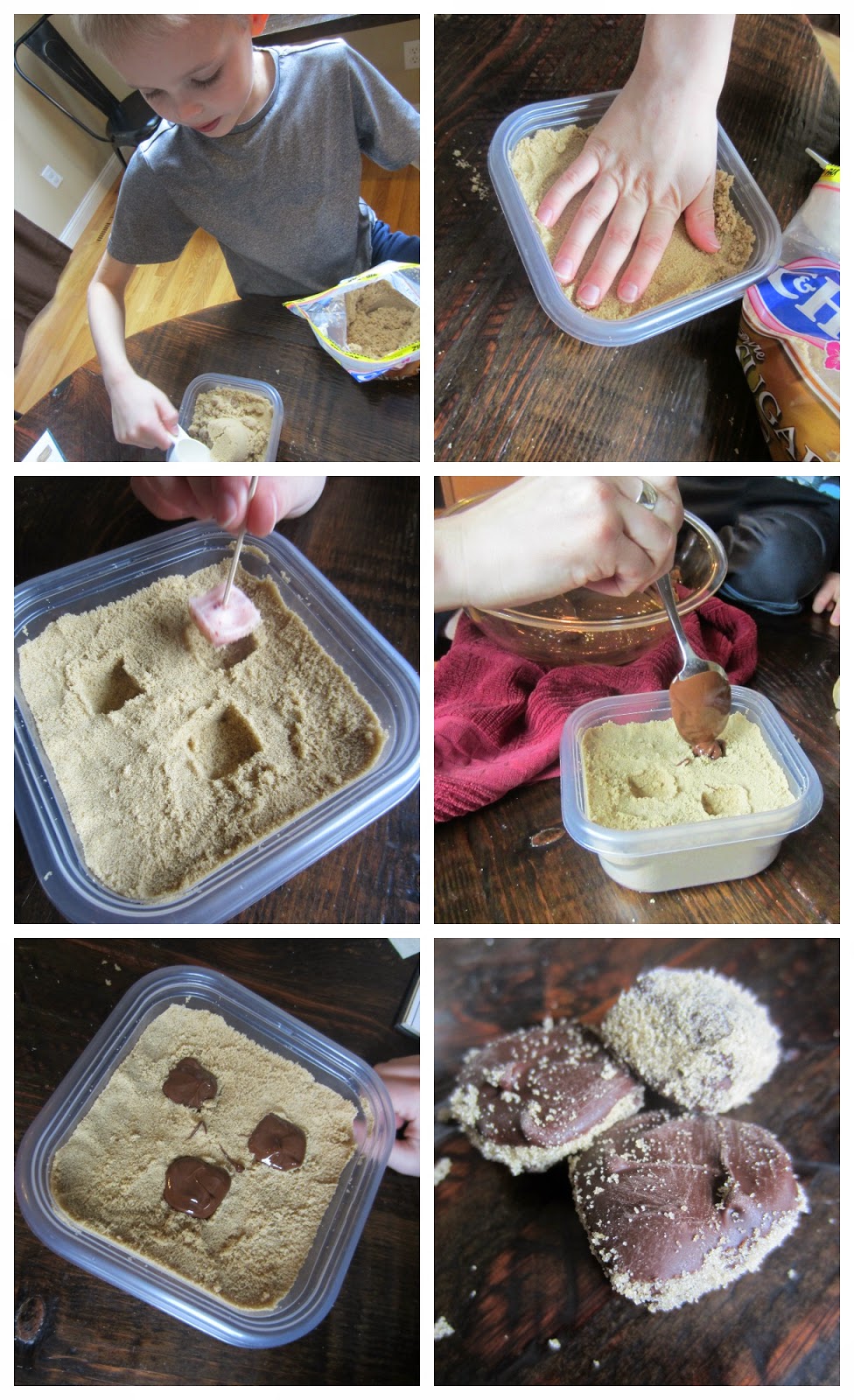 This was a fun - and delicious - exploration of one of the most phenomenal minds of the Renaissance.
Posted by Deceptively Educational at 6:00 AM