When our boys and I were marveling at how big and bright the moon was last week, I got the idea to develop this little game.

It's an adaptation of the game Yahtzee, which our 9-year-old loves to play with his grandma. Download the free PDF from Google Drive here. For two players, you'll want to print 8 copies of the game cards (Print more for additional players). Cut and shuffle. 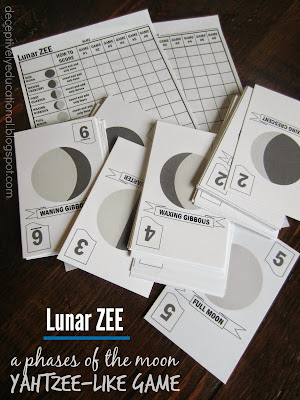 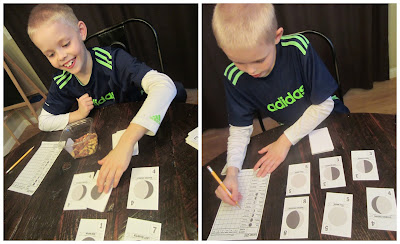 Play alternates between players. If all the types of hands have been scored and a player has yet to get a hand for sequence of five, they can mark this hand as zero. When the game #1 column is filled with numbers, players will add the total and determine who wins - the player with the highest score.

Variation: My youngest son (age 5) wanted to get in on the action. For him I just provided two sets of the cards, shuffled and arranged them face down so he could play memory. 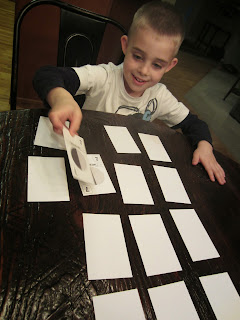 Read
When we were done playing, my oldest son read The Night Sky to my youngest. This beginning reader provided just the right amount of detail for my youngest and had some more complex facts and ideas on two pages at the back for my oldest.