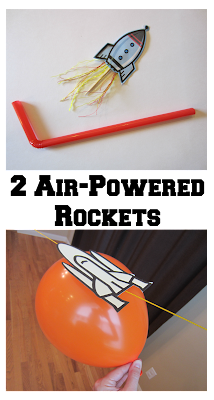 We're no strangers to air-powered experiments. Check out our balloon-powered pinwheel and swimming balloon squid. The success of those two activities pretty much guaranteed my son would have a blast with this.

Here's what you'll need:
Disposable Bendable Drinking Straw
Two pictures of rockets (use clip art or draw your own; just make sure they are mirror images)
Toothpick
Thread/string
Hot glue

Cut out your rocket pictures. Ours were approximately 2 inches by 1 inch in size.

Turn one of the rocket pictures over and place a small bead of hot glue running up the center. Place the toothpick in the glue so half of it extends out the bottom of your rocket. 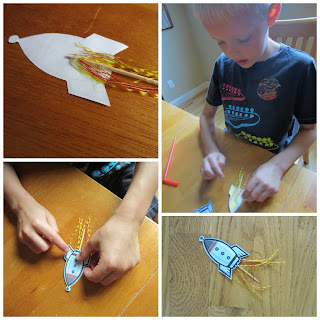 Add glue on either side of the toothpick and carefully add threads to simulate engine exhaust (remember, the glue is HOT!). Now add some more glue to the entire rocket and place the other picture on top, sandwiching the toothpick and threads.

Grab a straw and insert the toothpick into one end. Blow through the other end to launch your rocket. 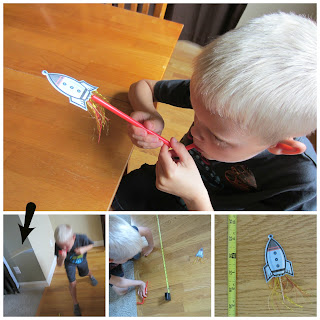 Turn this into a measuring activity! We placed a measuring tape on the ground and kept track of which launch went the farthest. My son's record was 5 ft. 8 inches!

Here's what you'll need:
Packing tape
Picture of a rocket (use clip art or draw your own)
Disposable drinking straw
String/Twine/Cording

Cut a long length of your string and affix one end to a surface that's elevated (make sure it's not too high for your child to reach). We used the packing tape to hold it. Now cut the drinking straw in half. Thread it through the end of the other end of the string.

Now tape that end to another area that is lower, so the string is at an angle. 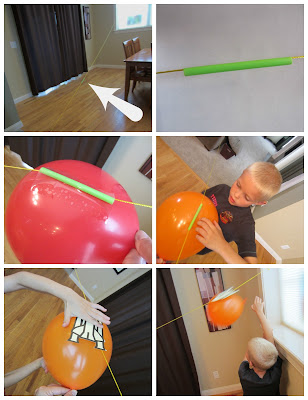 Blow up a balloon but do not tie the end closed. Use a piece of packing tape to adhere the balloon to the straw that is on the string. Make sure the open end of the balloon is pointing toward the elevated end of the string.

Keep the balloon pinched shut with your hands or use a clothespin. Add a loop of the tape on top of the straw and place your rocket picture on top.

Now release the balloon and watch the rocket whiz down the string!

NOTE: We found it difficult to reuse the balloons so if you do this, have LOADS of extras handy. We launched our balloon-powered rockets again and again and again. It just never got old!
Posted by Deceptively Educational at 7:38 AM