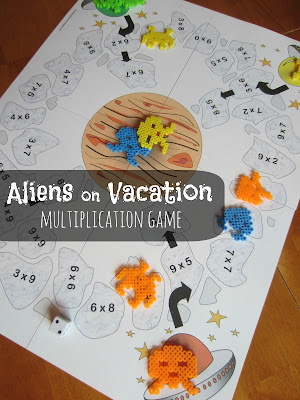 When my son finished math camp, he came home toting a notebook filled with math problems and two ziploc bags of flash cards. One was marked in bold Sharpie "needs to work on."

There was nothing subliminal about it. My son had mastered many of the facts but a little more than a dozen multiplication problems continued to stump him.

Rather than quiz him with the flash cards, I got busy making a fun board game with the problems he was struggling with, and the rest of the fearsome fifteen that kids often miss.

I call the game "Aliens on Vacation."

Several families of aliens went on vacation, but they're having trouble finding their way home. Help them return to their home planet (in the center of the board) by helping them maneuver along the space rocks in orbit. 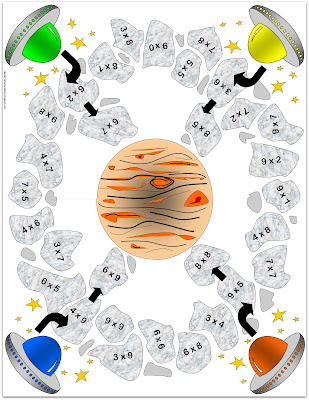 What You Need
Game board (print this 4-page PDF, trim, align and tape together)
Die
Alien game pieces (3 for each player in like colors)
Multiplication table (optional)

Our alien game pieces were inspired by the space invaders game. We recreated them using perler beads. This was an excellent fine-motor art project!

Not crazy about perler beads? What about making some pom pom aliens? Check out an example here.

How to Play
Three like-colored aliens are placed on the UFOs of the corresponding colors. Each player takes turns rolling the die. When a player rolls a six, their alien can leave the UFO and begin traveling along the orbiting rocks. 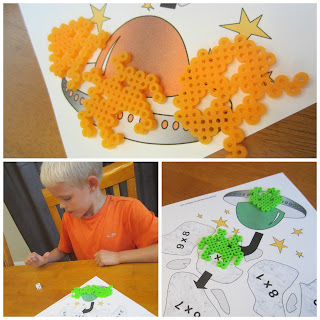 The alien is moved to the rock immediately in front of the UFO, but only if the player can answer the multiplication problem correctly. Play moves to the next player who rolls, answers the problem on the rock that number of spaces away, and moves their alien . Each time a player rolls a six, a new alien can move out of the UFO.

Players must answer correctly to move their alien. Stumped? Use a multiplication table! 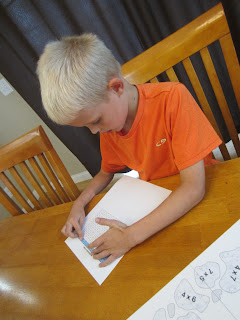 If a player rolls and lands on the same rock as an opponent, that player can send their alien back to the UFO. 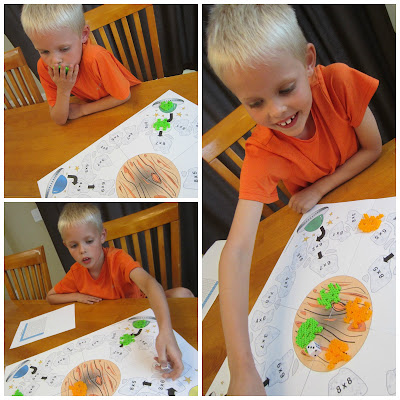 The first player to get all of their aliens home wins!

Love this game but want to practice OTHER skills (sight words, addition problems, etc.)? Download a blank game board here and write on the rocks!
Posted by Deceptively Educational at 7:21 AM